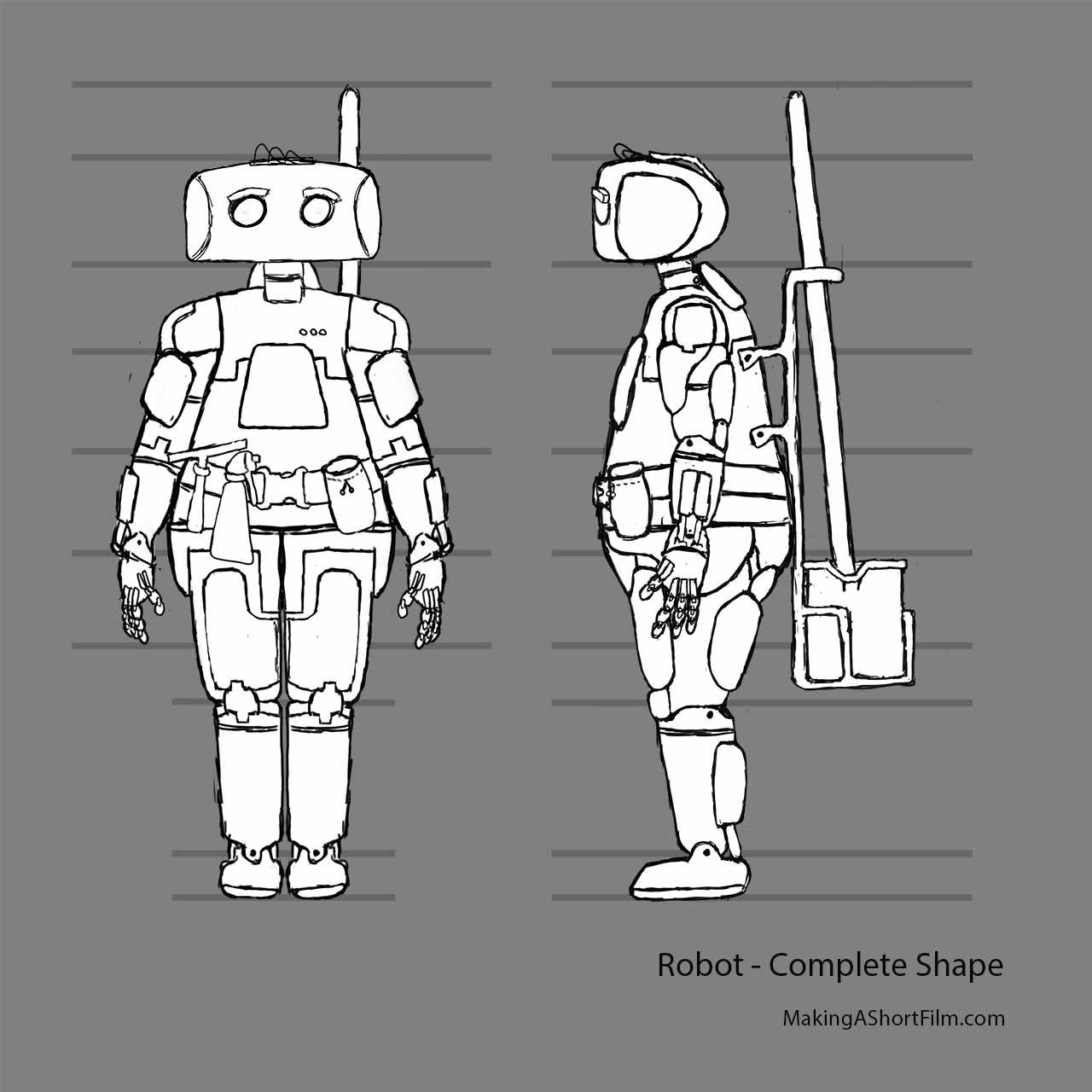 With the mechanical parts already figured out and having a general shape as a base, it was fairly easy (just time consuming) to look at those two as guides, and draw the full robot for the first time. I drew the front view first and then I drew the side view based on the front in order to keep them in sync (note the helper lines at the same heights on both parts). The result is visible above.

When comparing the front to the general shape outlined earlier by overlaying it in red, it is clear that they ended up being fairly similar. 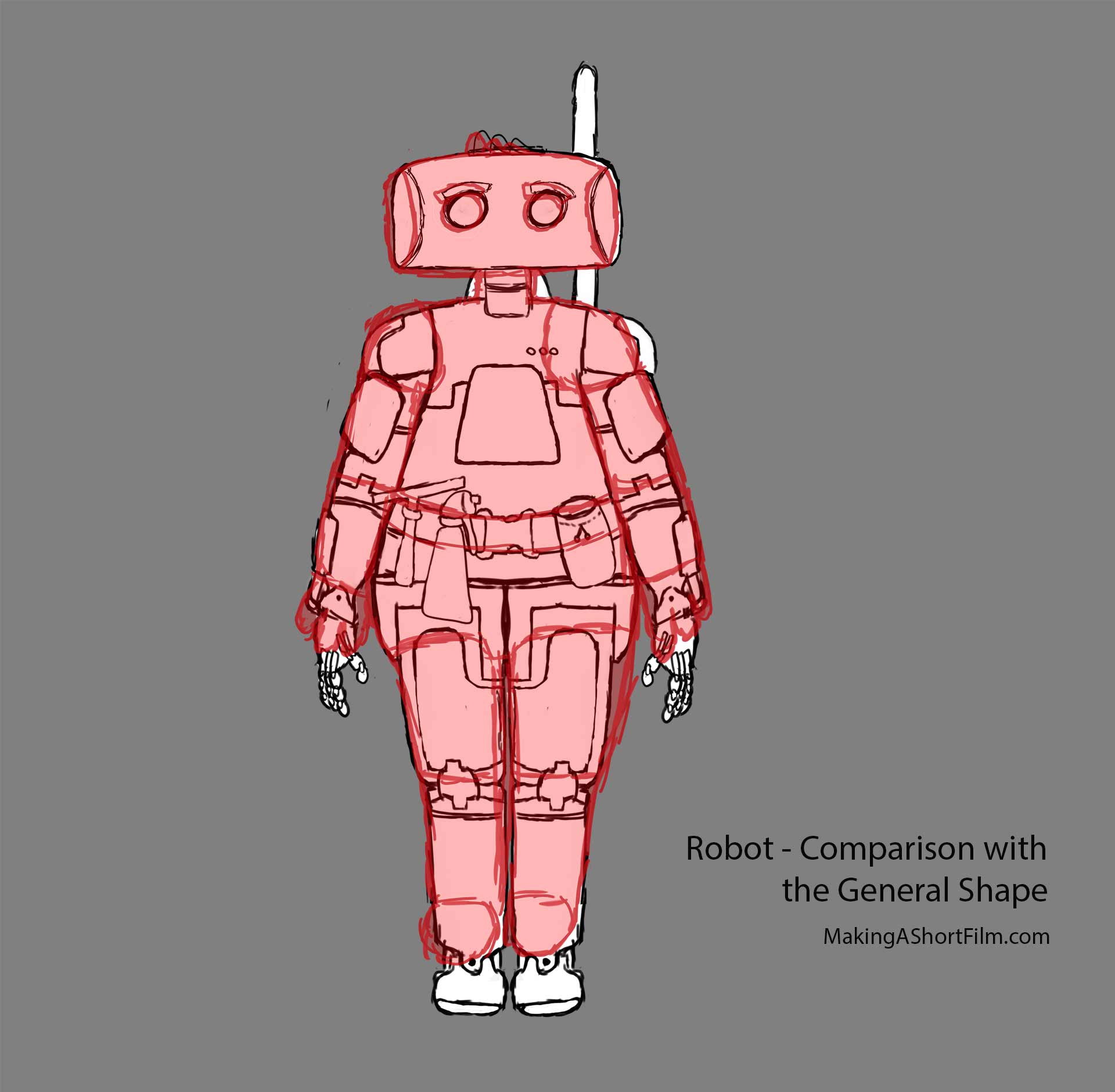 The big change I did was making the arms and legs a bit longer. There is not a lot of difference, but it has a big impact. This makes him a lot less plump, and frankly I think it gives him a less memorable shape. However, imagining me animating him later on made me realize that he would probably be too immobile for my taste in his old shape. I want him to be able to take long steps and not walk like a little poodle, as well has good reach. So, a little bit less funny looking, but hopefully funny enough.

This is all very difficult, because whatever design I make here will basically dictate the look of everything else in the film, since this is the first piece and all future pieces will have to fit together with it. Since the Robot design is pretty realistic after all (no crazy proportions or shapes) I am afraid I will have to make the rest of the film, especially the humans, too realistic. And I don't want that. I want the Old Man to be closer to Carl in Pixar's "Up" than a real old man in terms of realism and style.

So I am torn. Should I try to make the robot look more like a caricature? On one hand, yes, it would most likely benefit from a more cartoony style. On the other hand, I like the way it looks, and I am having a hard time determining how cartoony it already is. Perhaps humans with a (moderately) cartoony style could fit alongside it without their styles clashing.

So, I will keep the design like this for now, and potentially adjust it later, if I feel like it doesn't work with the humans I have I mind. Hopefully any adjustments will be fairly easy to do, without the need for drawing anything from scratch. Instead I should be able to adjust the proportions of the images I already have. 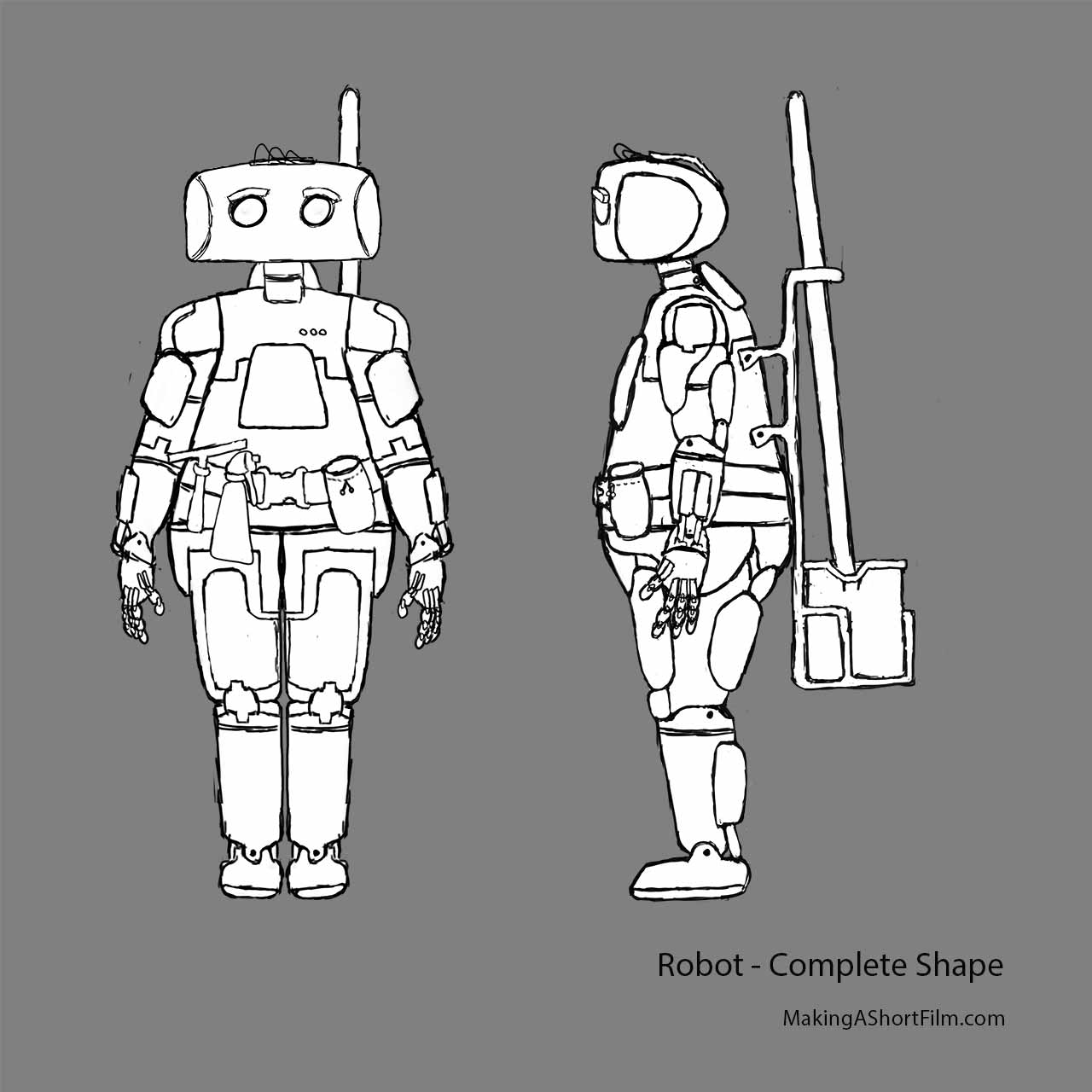 To summarize, I am fairly happy with the result. It doesn't look like something Disney would do, obviously (but who would expect that), but I still think it looks like something fairly well-designed and unique. When I look at it, no other character immediately pops into my head, which I think is a good sign (although it could also be because it is simply too generic). Please tell me what you think of the result in the comments, and if it reminds you of any other characters you have seen! :)

The next step will be to make the drawing more detailed with cleaner, final shapes. And even more importantly, adding shading, trying to get a feel for how the 3D will affects its shape (all flat parts in the image will have different depths and curves which can change the appeared shape quite a lot).