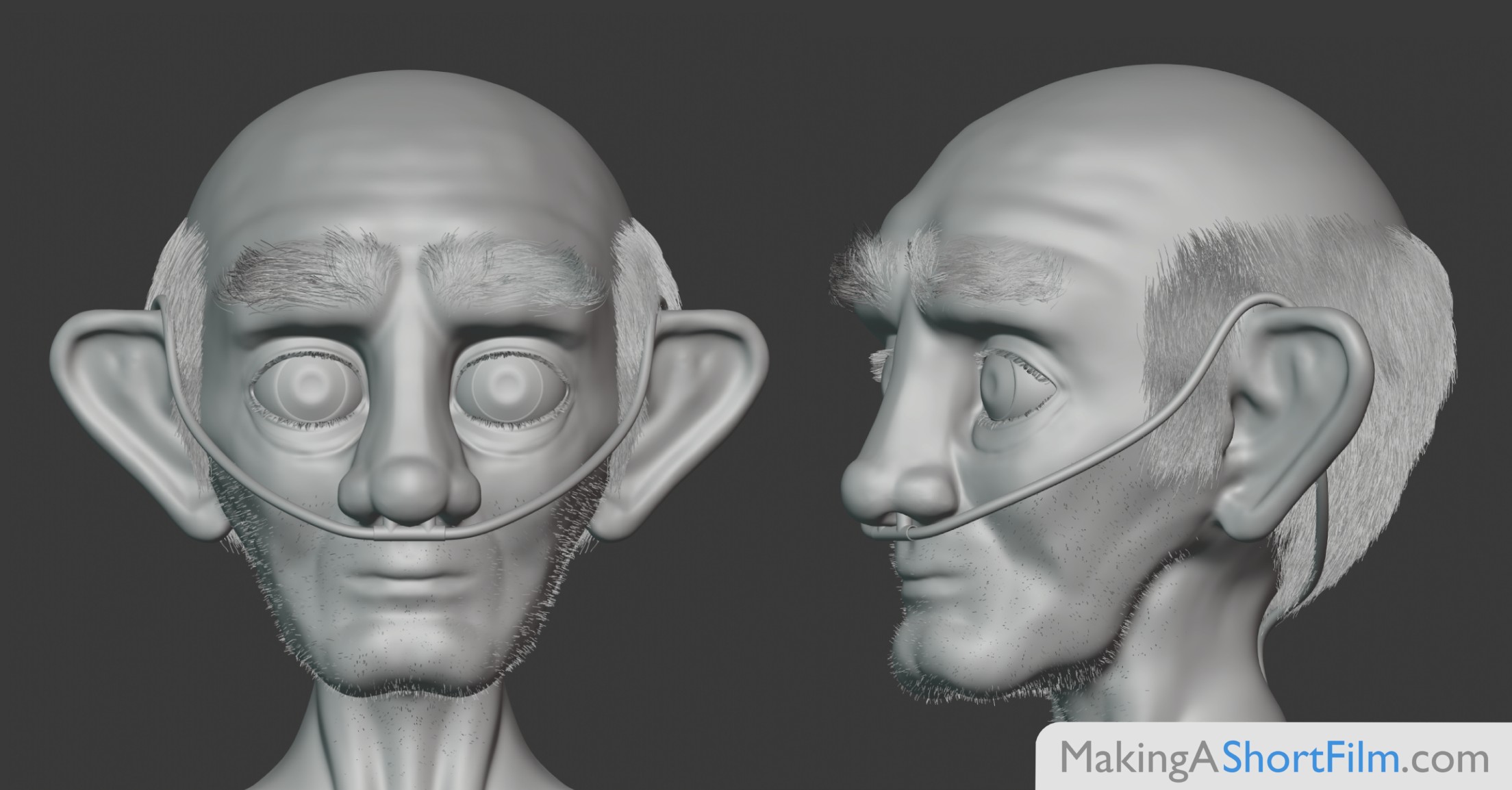 The most obvious change since last time is that I have now added real hair (particles) to the model, replacing those mesh placeholders. I gave him a small beard as if he hasn't shaven in a couple of days, to give him a bit of a rough, abandoned look. I also gave him fairly long but straight eyelashes so they won't be too prominent, bushy eyebrows and hair around the head. They all consist of different particle systems for freedom and flexibility, with the main hair actually consisting of two, separating out the sideburns.

The beard is the only particle system that I applied directly to the model, since its placement and flexibility isn't so critical. For the others, I created separate particle emitters by duplicating parts of the mesh, as can be seen in the image below. The strands of the left and right sides of the head are exact mirrors, which I did by simply duplicating the particle emitters and mirroring them. This means there is a mirror line on the back of the head, but I don't think it will be noticeable in the finished result. If I down the line feel like I need a bit more randomness, I will modify/reshape the other side slightly so they don't match exactly, but I will keep the mirror for now since it makes it easier to make changes if that becomes necessary. 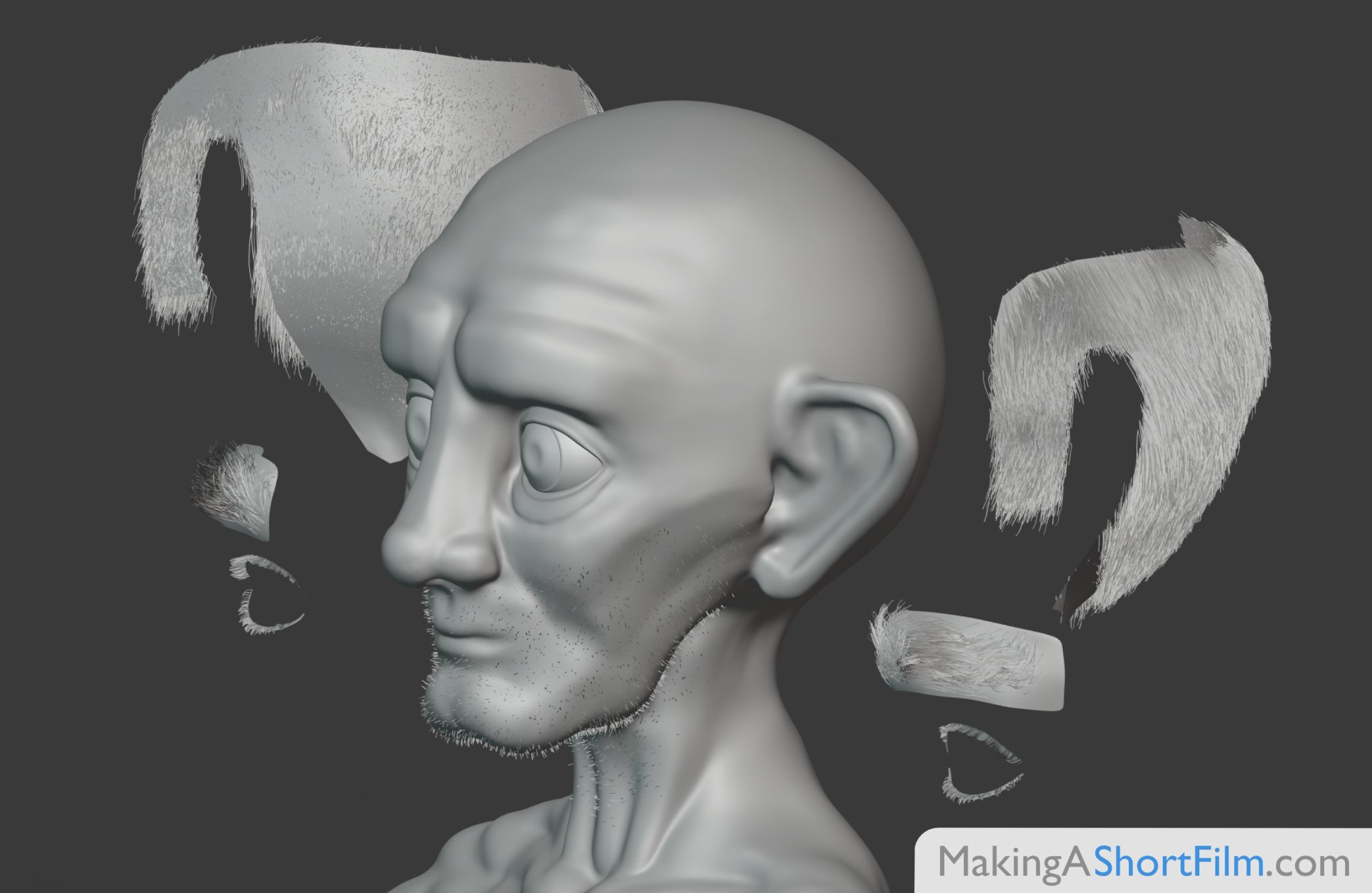 I did consider adding some body hair, especially on the forearms and hands, but did not do it. Perhaps I will add them later if I feel like it is needed.

But that is not all that has happened. Looking beneath the surface, there is quite a big change. I have retopologized the entire model. When something is sculpted, it consists of a bunch of small triangles, which means that it is difficult for the computer to deform it and still have the shape look good. So in order to make it possible to properly animate the model later, the topology had to be fixed.

So, I have done my best to "recreate" the sculpted mesh, using as good geometry below the surface as possible. As you can see to the right on the image below, I did my best to divide up the different areas, and have the geometry follow the contours and lines of the model. The result is not perfect in any way though. It has quite a few poles (a vertex with more than four edges) , which is clearly visible as spots in the wireframe when cranking up the subdivision surface (see the middle head in the image below). These could pose a problem when deforming the model, but hopefully it won't have too much of an impact on the final result. Also, the loops don't exactly follow beautiful directed paths, but instead spiral into very weird shapes. At least the entire model consists solely of quads, which is necessary for good deformation. 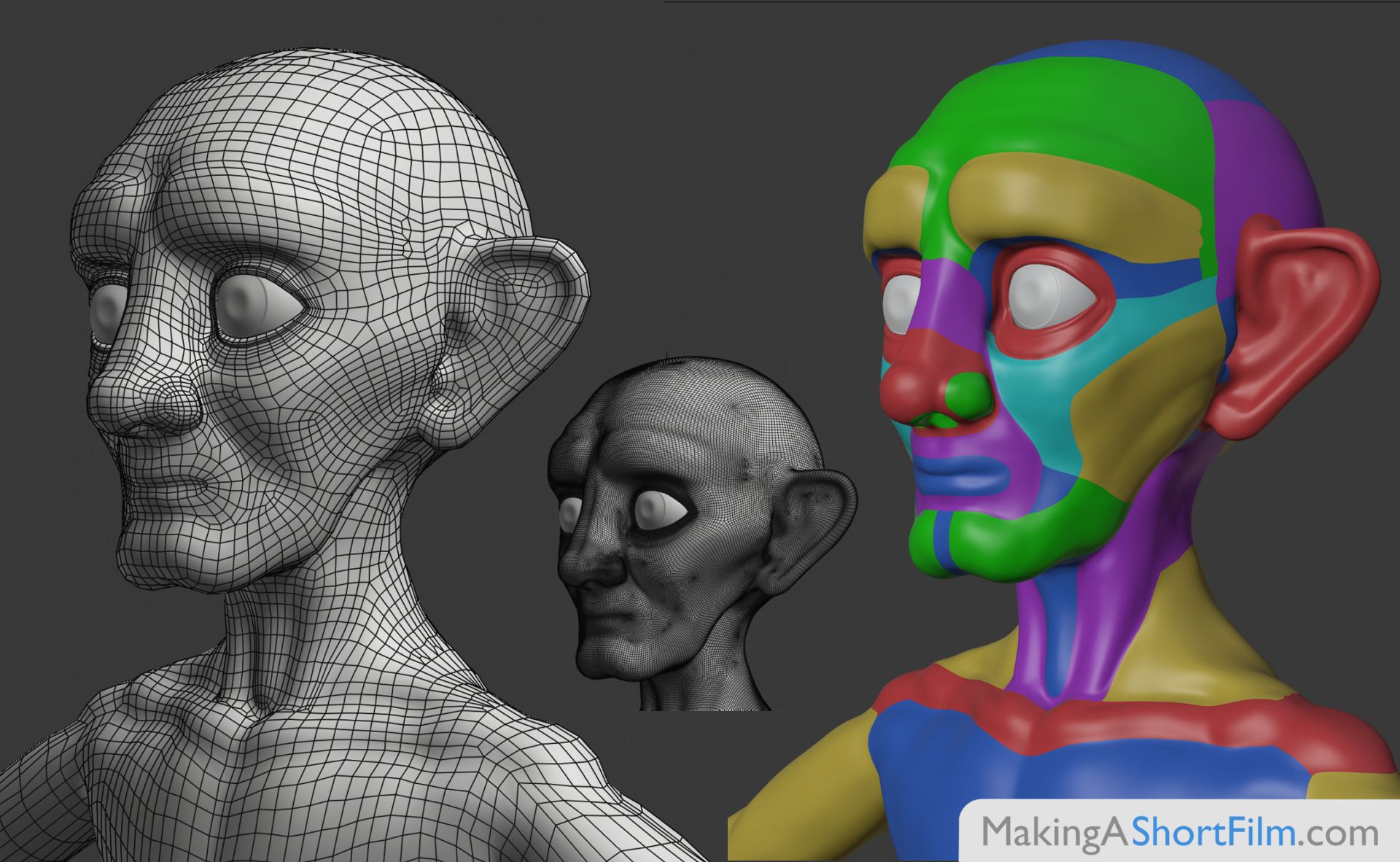 In order to keep a low polygon count for fast manipulation of the mesh when working, but still retain the details of the high quality sculpt, I decided to use the multi-res modifier. I baked in the details of the sculpt into the higher levels, so I can easily move the levels from 0 up 2 for maximum quality. Note that since the sculpt was a bit uneven, during some minor testing, I think it actually looks the best on level 1 with a sub-surf modifier instead. It gets a very clean and smooth look, while still retaining most of the shape. You can see the difference between the three levels in the image below (without any sub-surf modifiers).

The part of the mesh that suffers the most from only using level 1 is the hands, which really need level 2 to look right. That is why I am keeping the higher level, so I can use it in scenes where the hands are in focus, but for most of the film, I will most likely use level 1 with an extra sub-surf modifier.

In many ways, this finished model looks much better than the sculpt, since I had the ability to clean up the shape more easily. I have always struggled in getting good, even, smooth lines when sculpting. The biggest difference can be seen in the eyelids, which were a bumpy mess previously. Now I have modeled them separately (I simply excluded them when I copied the shape of the sculpt into the multi-res modifier) allowing them to look like I want. 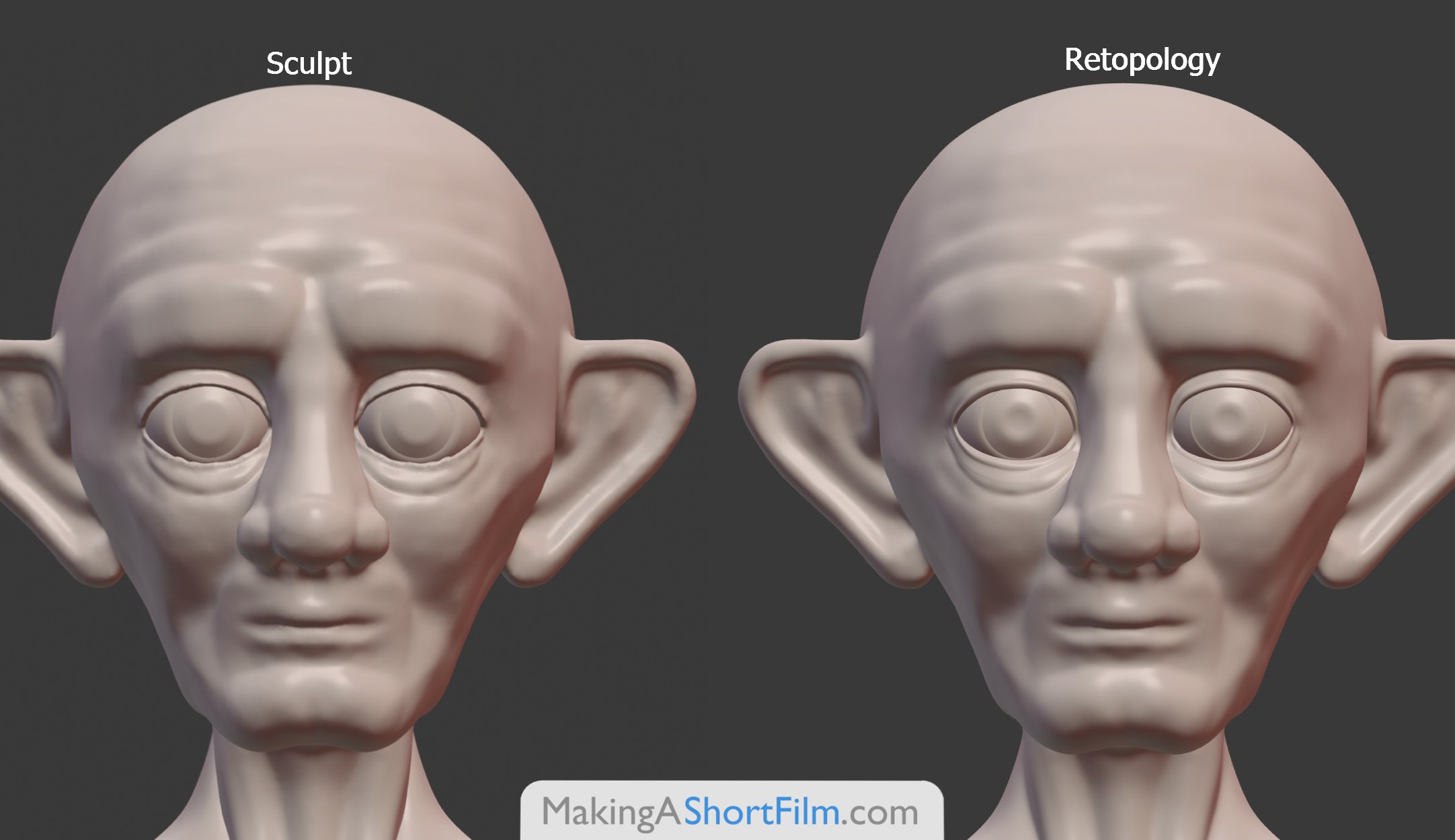 I can't remember seeing anyone else using the multi-res modifier as a way to switch detail levels for animated characters (although I have seen many tutorials over the years, so I can't be certain), so I hope that there is no obvious problem by doing so that I will discover down the line. After I have rigged it and test animated the character, I will do a short tutorial on how I did it, but I don't want to share the technique until I am certain it works well.


This now means that the Old Man now is totally complete when it comes to modelling. You can download the finished model down below. The next step is to rig him and make some test animations so I am sure everything works well.

Lastly, I would just like say thanks to Gearlux for contributing to the short film! I really appreciate your support.