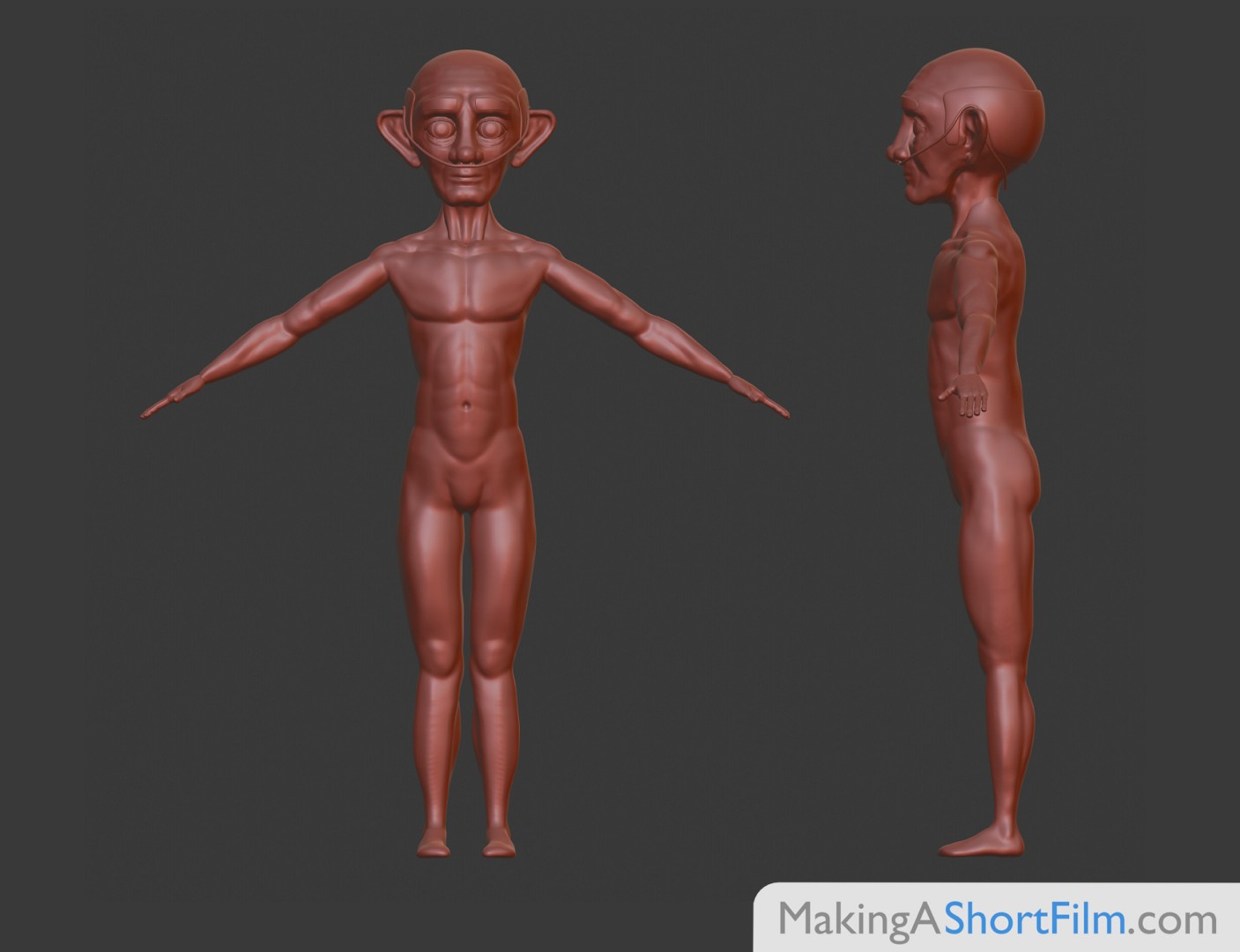 I have been away from the short film for a while, but now I have finally completed the next step. And this step was extra daunting as well, sculpting the first human character, namely the Old Man! You can see the final shape he will have in the image above.

It took a lot of iterations, adjusting here and there, until I reached something that had captured what I had intended the concept art to be. My goal was to take the concept art as a base, and make the design better, and I do think I have succeeded in doing so. Here is a video showing off the resulting sculpture, as well as all the different iterations I moved through during sculpting, until I reached the final result. Note that I added some temporary eyebrows and hair just to see the shapes, even though I plan on using real strands later on in the process.

I do want him to be fairly cartoony. This made me end up with pretty strong shapes, with a few strong lines in his face which was kept sharp. When I tried smoothing him, he felt a bit too anonymous. This is definitely due to my lack of skills, in which I have to rely on more strong lines and shapes in order to convey character. After all, the people at Disney can keep things very round and still have a lot of character.

Overall though, I am pleased with the result, and I can't wait to see him in motion. I wanted him to look fairly cute in order for people to root for him, which I think I have pulled off decently. Considering the limitations (one person with limited experience), I think he looks pleasing enough. Hopefully, the shape will look and work well when it is being animated as well. 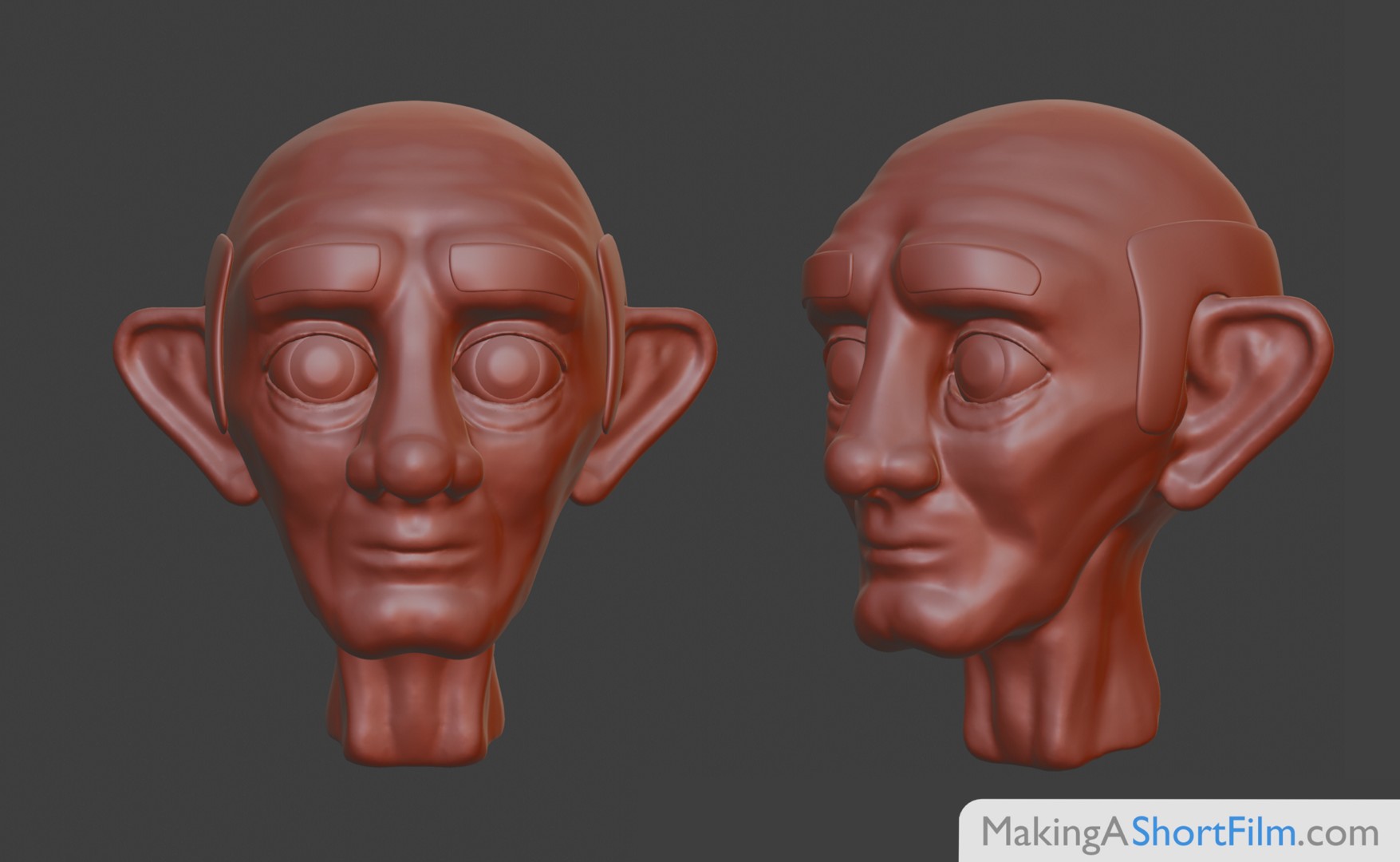 While I was very careful with the face, which is how we as an audience will connect with the character, the body did not receive the same amount care in the shapes. First of all, most of it will be covered in clothes, not being directly visible. However, I still wanted to make everything as anatomically correct as I could, just so he would move and look realistically, with the clothes falling well onto him.

Even the body parts that are out in the open, like his arms and hands, I was not super careful with either. They will not be under extreme close-ups or scrutiny, so I think this detail level will suffice. Note that he has no toes at all, since they will be completely covered by shoes at all times.

The Old Man doesn't match the concept art I made earlier (view it here) perfectly since I felt a couple of changes had to be made when seeing it in 3D. First of all, the head was simply way too big, so I scaled it down, and scaled the body up in order to give him the same height of 1.58 meters. Now he has more realistic (but still very cartoony) proportions body-wise, making the body just over 5 heads high. I scaled down the head in the concept art as well, to allow me to continue look at the references while modelling. 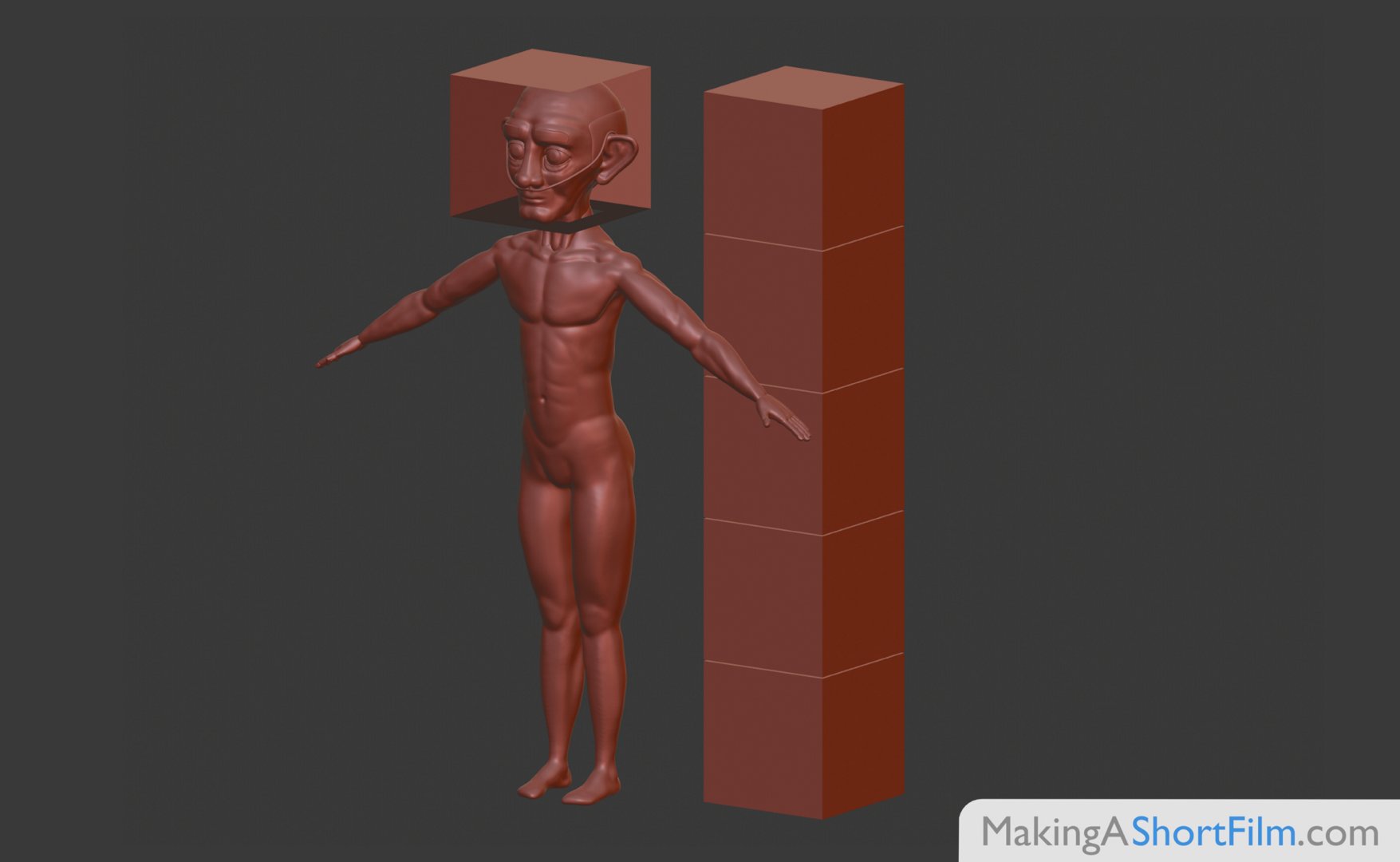 As a reader on Reddit pointed out to me before, the height on the knees were far too low on in the concept art, giving him really weird proportions. This became very evident when sculpting the body without the clothing, so now I have adjusted it so it looks more normal. In hindsight, I should have drawn him without any clothes first to get those proportions right, before adding the different outfits as layers on top.

The eyes are a bit different as well, since their shape in the concept art didn't really work well in "reality". I also tried to give him flatter lips, in order to make him look older. However, I felt like it made him look a bit too unappealing, so I removed it. Hopefully he looks old enough without it.

In order to more properly evaluate if the shape will work in the film, I sculpted a few different expressions, simply moving parts around to get a feel for how he will look. Note that this is just using shape keys to modify the sculpture, and is not ready to be animated for real at all (retopology and rigging is needed for that which is a later step). It is simply very rough, just to see if the basic shape works. I will take more care in the final rig to make sure that it looks the best it can.

All of the expressions I tested can be seen in the video higher up in this post. Being happy was definitely the hardest one to pull off, but hopefully it will look a bit better with the finished model. I also included an angry-expression. Even though I don't plan for him to be angry in any particular scene, I do want that emotion to work, so I can include it if I see fit. For example, when he is struggling with his emotions, he could get angry just for a fraction of a second.


With the main shape of the Old Man done, I will move on to rigging him so he can be fully controlled. In order to do that, he must also be retopologized. See you when it is done!