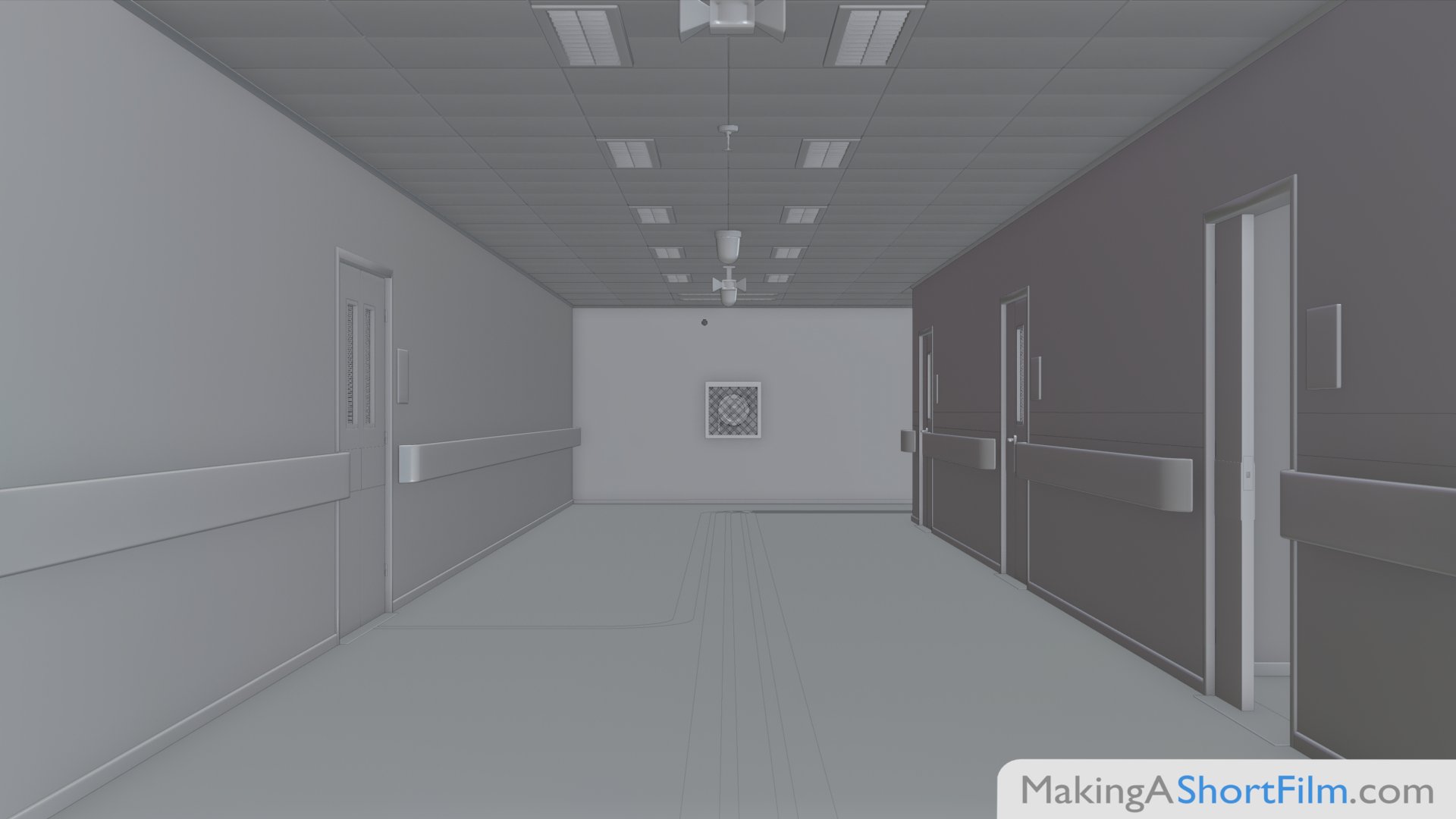 This location relied quite a bit on reusing models already made for the hospital room. For all the ceiling items, I could copy what I had made previously, and put them in a layout I thought looked pretty good using particles. The different doors were also copied and adjusted to fit. Whenever I could, I linked the objects from the hospital room-file, so if I make any design changes in their, it is reflected in the hallway as well. 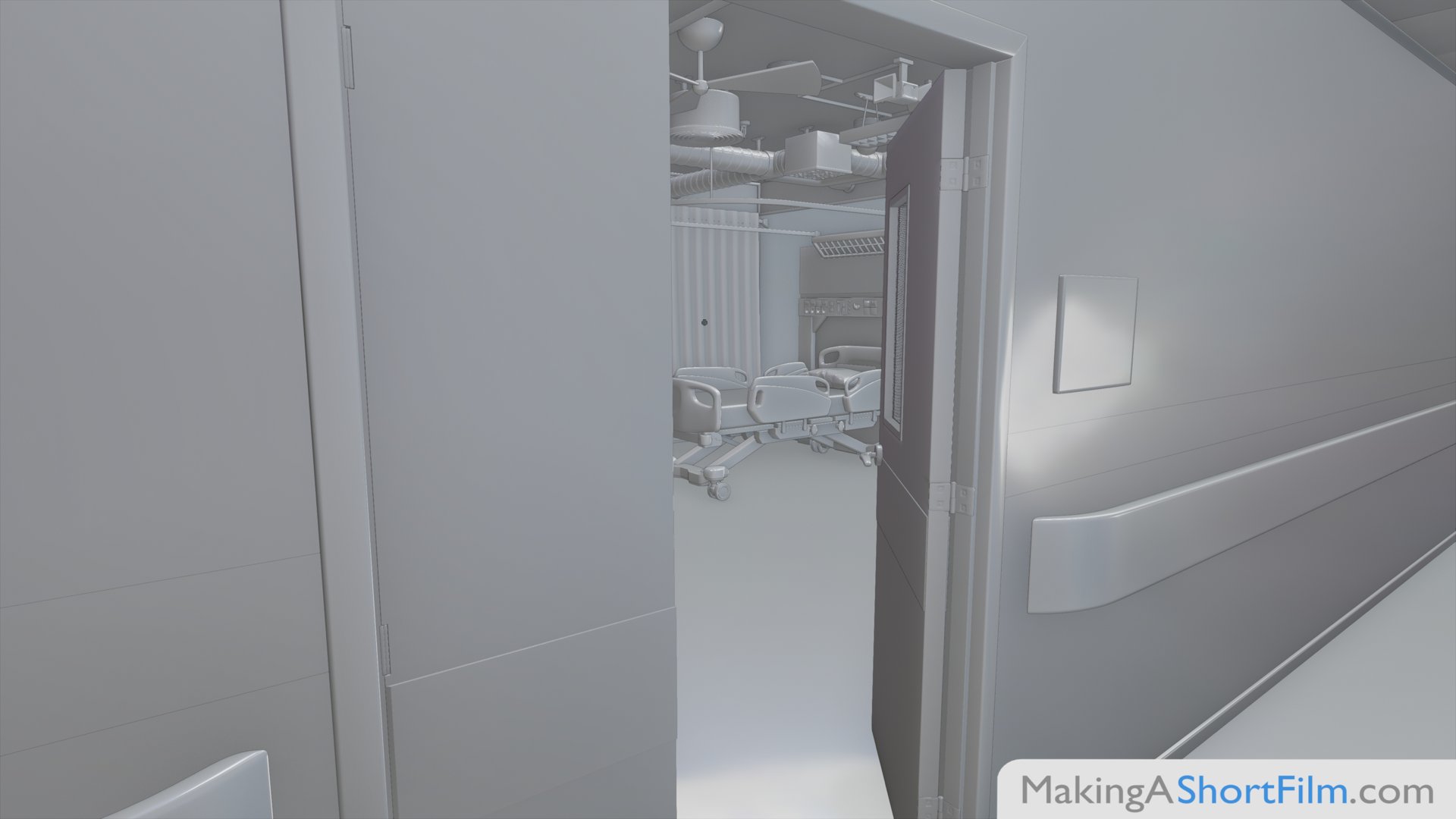 Although I used the concept art I had made earlier as a base (view it here), I did end up making a few changes.

First of all, I decided to "close" the ceiling by covering it with tiles, as if all the piping is hidden behind them. This makes it lower than in the hospital room, which by contrast shows all the pies and everything. I was unsure if I wanted the hallway to be as cluttered as the hospital room while making the concept art, but now it feels right to separate the two visually. Hopefully, the flat, lower ceiling with make the hallway feel a bit more claustrophic as well, all enclosed by flat areas.

Although I like the idea of them being in essentially a box with flat surfaces when escaping, I did feel like the walls ended up a bit too empty, making the room border on unrealistic instead of just unpleasant. Therefore, I decided to add a kind of railing along the walls, which I had seen in my reference images earlier. I am not entirely sure of their purpose, but I guess it is so that beds and equipment doesn't damage the actual wall if you run something into it. 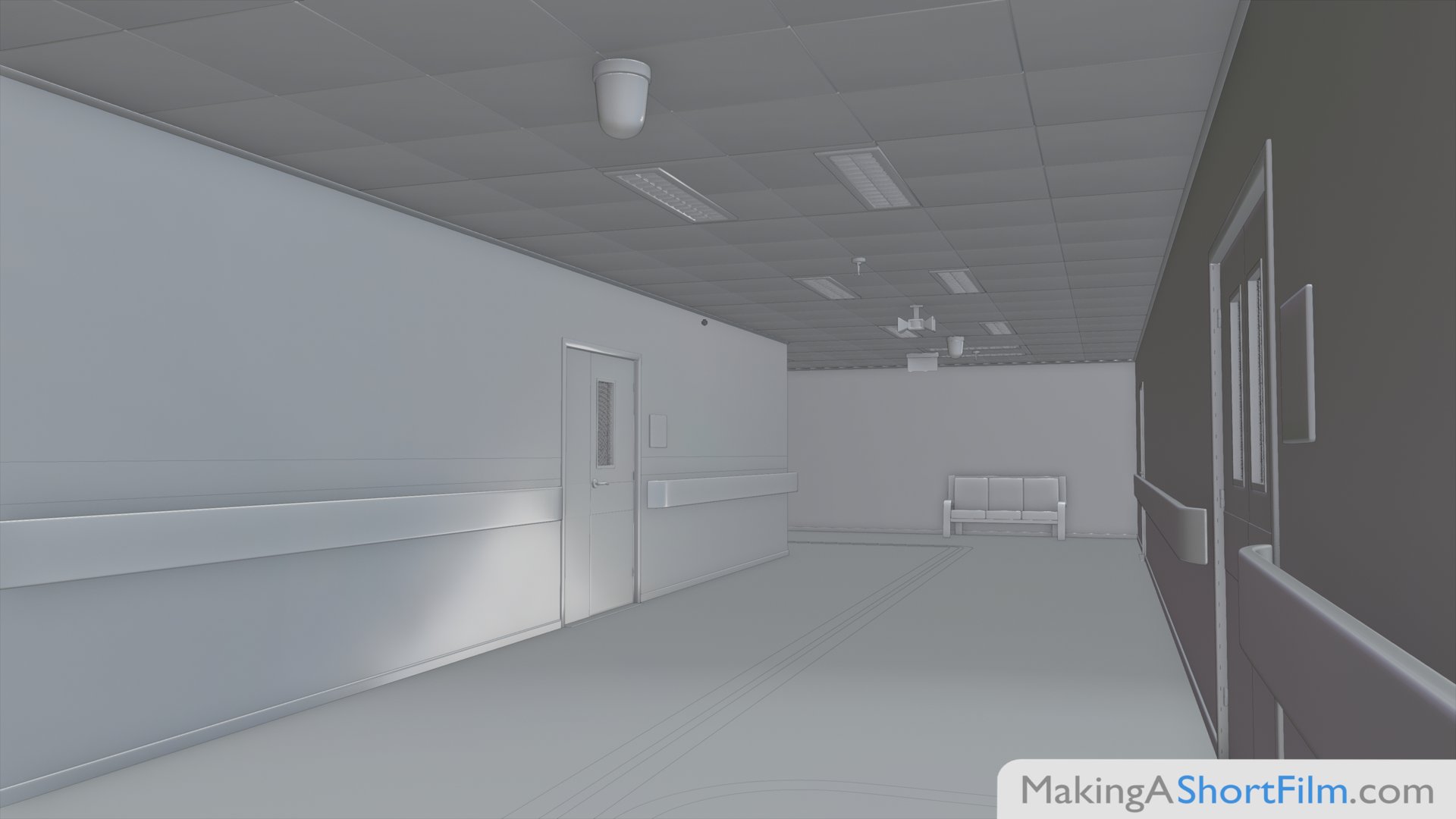 Secondly, I had only drawn the hallway from one point of view, so I hadn't decided what to put in the other end of the corridor. I don't want the wall to be empty for the same reason as above, so I had to come up with something. This is the direction the Robot and Old Man will escape, so I want whatever is there to feel fitting. I brainstormed a bit, and eventually landed on adding a kind of couch, which is common in hospitals for people visiting and such. A couch feels like they are walking towards something comfortable, as well as if it is luring them to stay and get caught. It feels like a good mix between them being stressed and trying to leave, as well as them walking towards something brighter.

Regardless, it was important that whatever I put there, didn't make it feel like the hospital continued around the corner. I want this to be the exit, where you leave, and not where you get to some other part of the hospital. Hopefully, by placing the single sofa closer to the right wall, I keep the area "around the corner" feel empty, as if it leads to nothing.

I also added a "Emergency Exit"-sign in the direction where they are leaving. I am not sure if it is on the nose, but I do feel like as an audience, you like getting a feeling of where they are heading.


Now after doing hard surface modelling for quite some time, I feel like it is time to dip my feet, and get started sculpting the more organic shapes of the film. I will start with the Old Man, and I would lie if I said I wasn't afraid he is not going to turn out well! Wish me luck!

A small ending note; this was update 50! I have written quite a bit about the project so far, and more is to come. I hope you all find it informative to see behind the scenes and the decisions taken for everything in the film.