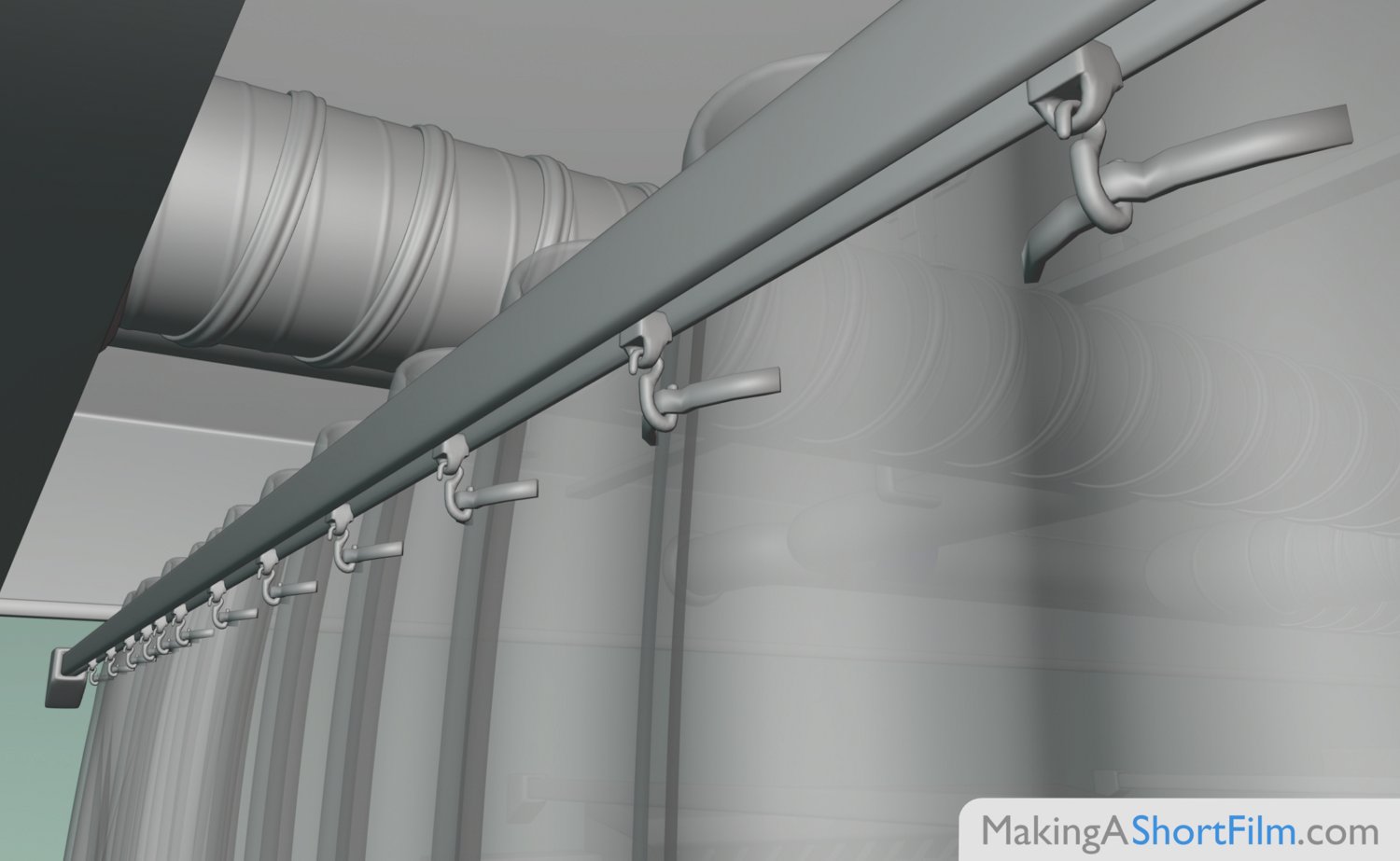 There are two different curtains in the room. There is the main one covering the window that will need to be rigged and simulated during the different scenes in the film when it pulled back and forth. There will also be a smaller, static curtain next to the bed that will only be there as decoration.

In order to model both of these in an efficient and realistic way, I will have to use a bit of simulation. For the dynamic curtain by the window, the simulation will used during animation, while the curtain by the bed will have the result baked into a final shape.

I had kind of wanted to wait with doing simulation work to at a later stage, but this forces me to do it know. Simulation is the area of CG animation I have probably explored the least beforehand, so I feel very new to it. My plan for the curtain is to run the simulation, and then add a fairly low amount of solidify to it, making it thicker afterwards. I will see how this works out when I work on the shader later. Perhaps I want it to actually be a single plane for look reasons.

My simulation settings ended up being fairly simple for now. Used the default for everything, except the bending to stop the top part of the curtain to fall down too much, as well as tweaking the self-collision distance to match the thickness of the cloth (the solidify parameter).

Overall, I decided to keep this object fairly simple geometry wise. Any added details, like seams or folding, I will simply fake it using shaders later. However, I did go into a bit of detail when it comes to the actual railing system, as you can see in the top image. I probably went overboard on it since it most likely this won't really be visible at all, considering how far away the camera will be, and how faintly transparent the cloth with be. However, this way, it is there if it ends up being seen in the film.


Here is a short video of two tests I made. I think it looks fine, except for the curtain going through the railing at one point (which I have already fixed). You can see the top part of the curtain fall down, which might be pretty realistic considering how extreme the movement it, but not exactly good-looking. However, that part won't be in frame in any of the scenes where the curtain is pulled, so that should be okay.

In order for the curtain to actually be pulled, I needed to add bones for each of the hooks, and actually connect the pinned vertices to them. That way, the entire curtain can be pulled back and forth by the railing as well, as seen in the second test in the video. 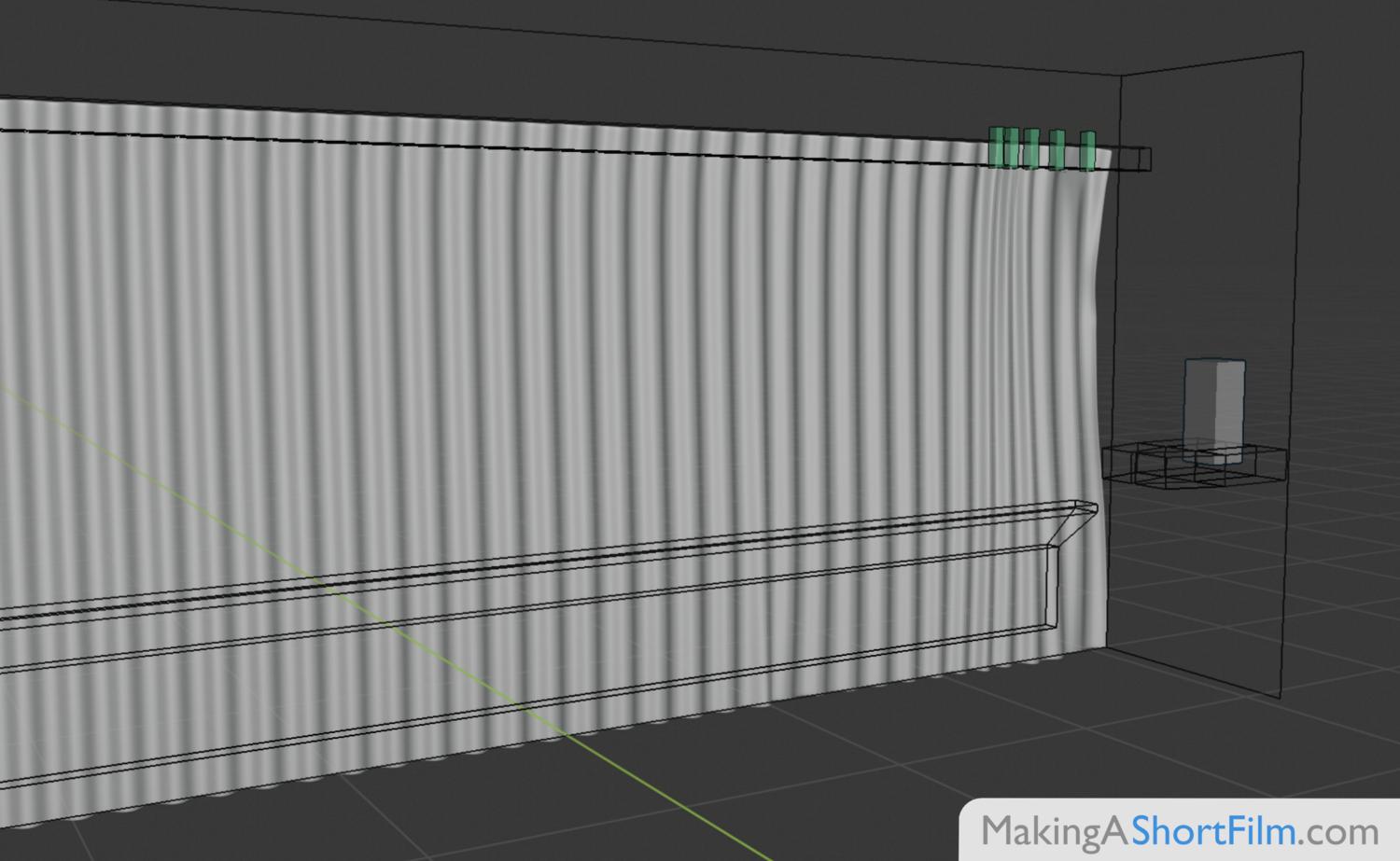 I thought about making the curtain rig a bit more clever, like when I pull it, the other holders are affected as well, but it will only really be pulled once in the film, so I don't think the effort is worth it. It is better if I animate each hook manually, like in the test. That way, I can make it look exactly as I want as well. These tests are not perfect by any means, but I will tweak them further when animating the actual scenes, since I then know how it will really look. These tests are just to see so everything is working.

I have stored a simulated shape as a shape key as well, allowing me to easily switch between a static shape and a simulated one with a control in the rig. I have also added a simple shape key where the cloth is pulled to the side, so I can do that for background shots without having to simulate it. That way, I don't have to simulate the curtain in every scene where it should just be there static and closed. You can take a look at the rig and the controls by downloading the finished .blend-file below.

These curtains also actually completes the modelling of the hospital room! Here is an image of everything in it, with a view of the window. I had to move the tray table a bit from where I planned to have it since it will be in the way of the EKG monitor. 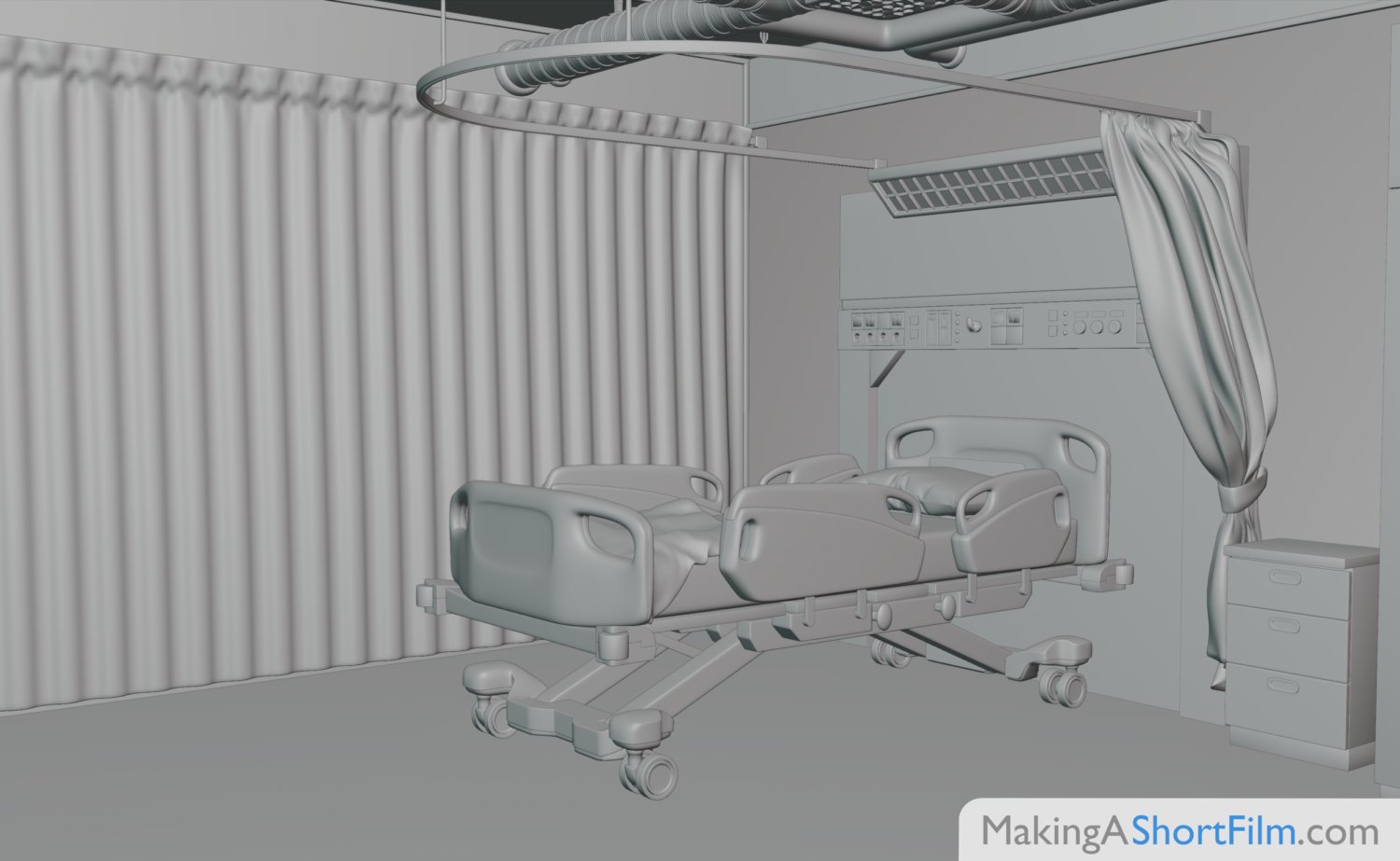 Another fun thing, the making of these curtains just pushed this film passed 1/4 made! See what is left to do on the progress page.


Next up is to do the hallway. I expect it to be fairly quick since I will reuse most of the elements in the hospital room, with just some small additions.