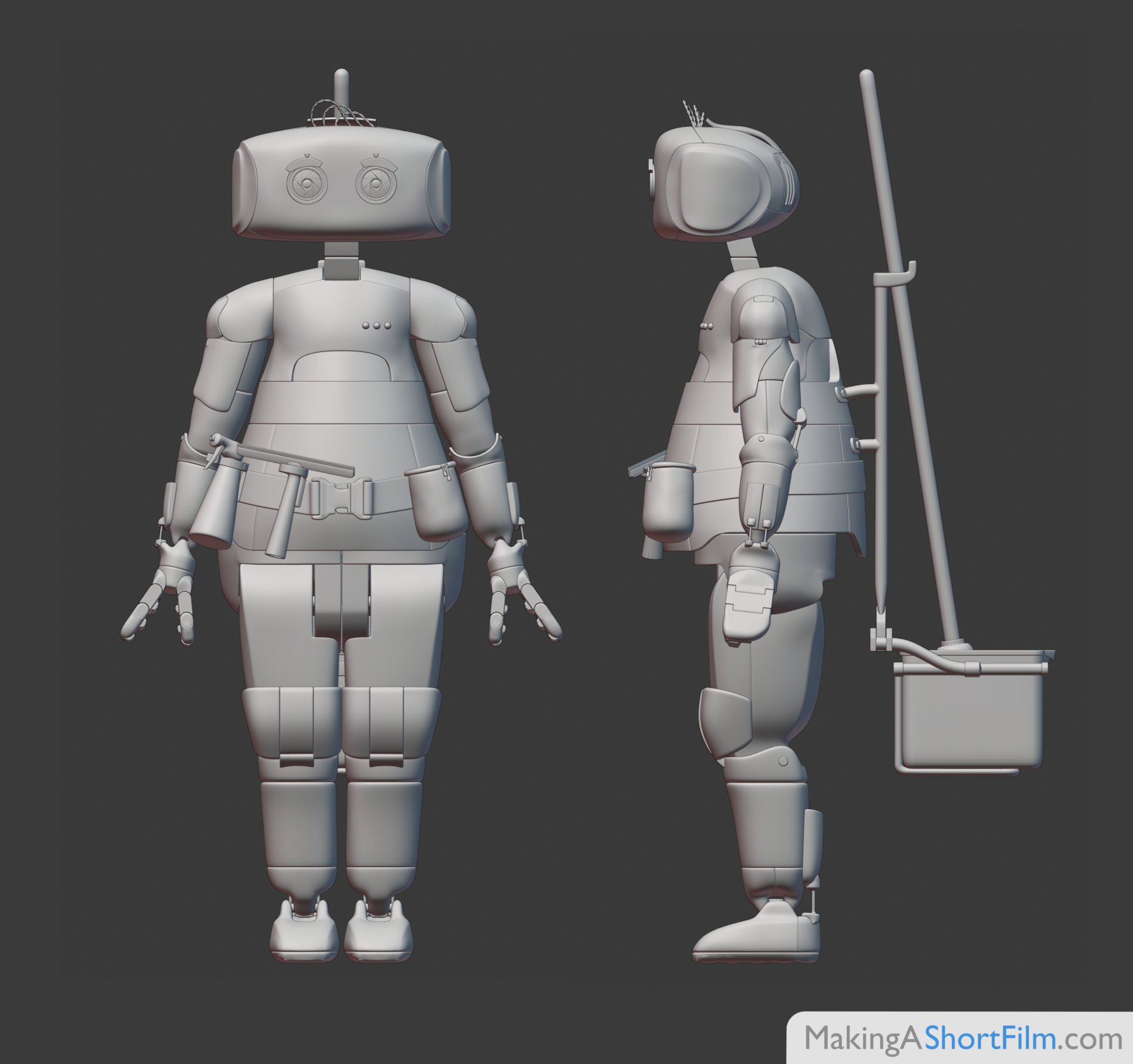 Woah, this was quite a lot of work! But now the Robot is modelled, consisting of 196 different objects. I can't tell you how fun it is to actually be able to see it for the first time. What was just a character in my head, and then a painting, now exists and can be looked at from every angle. Download the 3D-file at the bottom of this update to take a look at all the details yourself. There is a resolution slider in the file, where you can go from the "unaltered base mesh" at 154,000 polygons, up to the maximum quality with a bunch of smoothing resulting in 3.2 million polygons.

When comparing it to the concept art (see it here), the entire model is filled with minor to larger modifications to make it look better, as well as just to make the movements work. I had thought about the design as well as I could beforehand, but my brain is not powerful enough to really see if the shapes work together until it is 3D and can be moved. Just like the previous mechanical models, I added a base rig to the Robot to make sure that the movements worked and that things don't intersect. 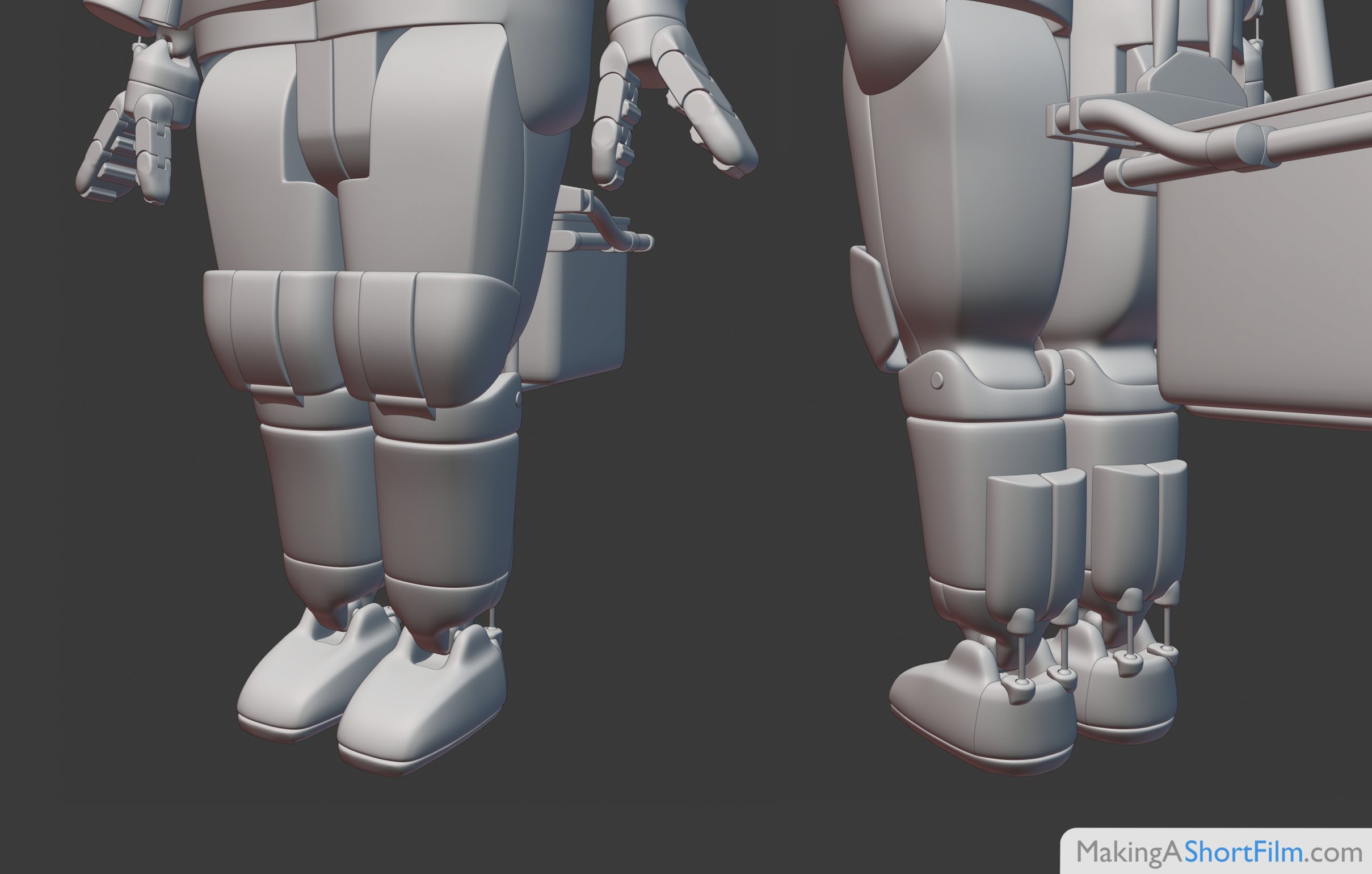 Not surprisingly, not a single joint worked without modification. But that is okay, since it still was much easier to model it with an aim, instead of going in blindly. I really feel like doing this robot with no concept art before would have been a nightmare, and the result would have been horrible. Now I am at least somewhat pleased with the robot. Like I said before, it doesn't look like something from Disney, but who could expect that. I still think it is cute and expressive enough.

A big modification compared to the concept art is that I skipped several "muscles". I couldn't get the muscle on the front of the thighs to work well, so I ended up skipping it and just leaving them clean. Instead I just let the kneecaps be there by themselves, since I still needed something to cover up the large hole that comes from bending the leg. I also removed the muscle on the back of the thighs, leaving them clean, as well as the muscle in the back of the neck that was supposed to tilt the head. Omitting these three muscles really simplified the design, while not impacting the mechanical feel of it too much in my opinion. 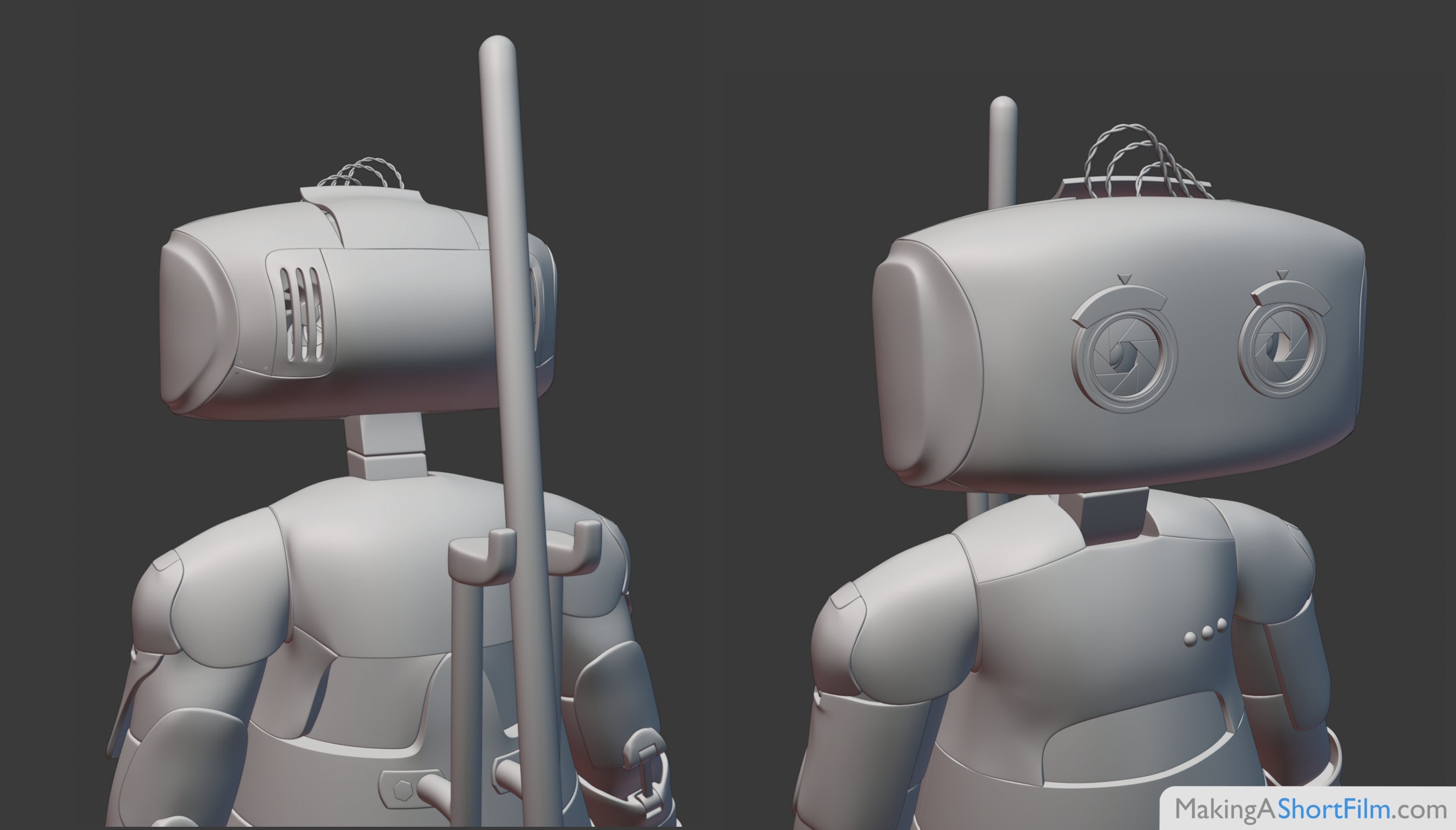 To give the Robot a bit more detail, I split up several of the large plates into smaller ones, introducing seems kind of, hopefully increasing the visual interest. Another detail is that I gave the sides of the head a bit more shape, instead of it being round like a melon.

I felt like the back of the head became very boring, so I added ventilation there as well as two fans. The idea is that they will constantly be spinning in a low RPM in there, hopefully also reinforcing the idea that the Robot is thinking, and therefore generating heat in his head.

Another thing I adjusted was the eyebrows. I felt like they didn't make sense in their current form since they didn't have a function. Why would someone building a robot put them there? So, I got the idea of having them being indicators for how much the cameras are zoomed in, showing the field of view. If this Robot was some kind of prototype, development robot earlier (which fits in with his clumsy form), something like that could possibly have been added. Their functionality actually fits with the feelings of the robot as well, since when you are scared you widen your eyes (widen your field of view in this case) to make sure no one is attacking you, and when you are angry/attacking something, you focus in on it, zooming in.

The inside of the eyes are really difficult, and I will most likely have to adjust the model when I work on the shader and I see more clearly what the final result will be. But this will do for now. 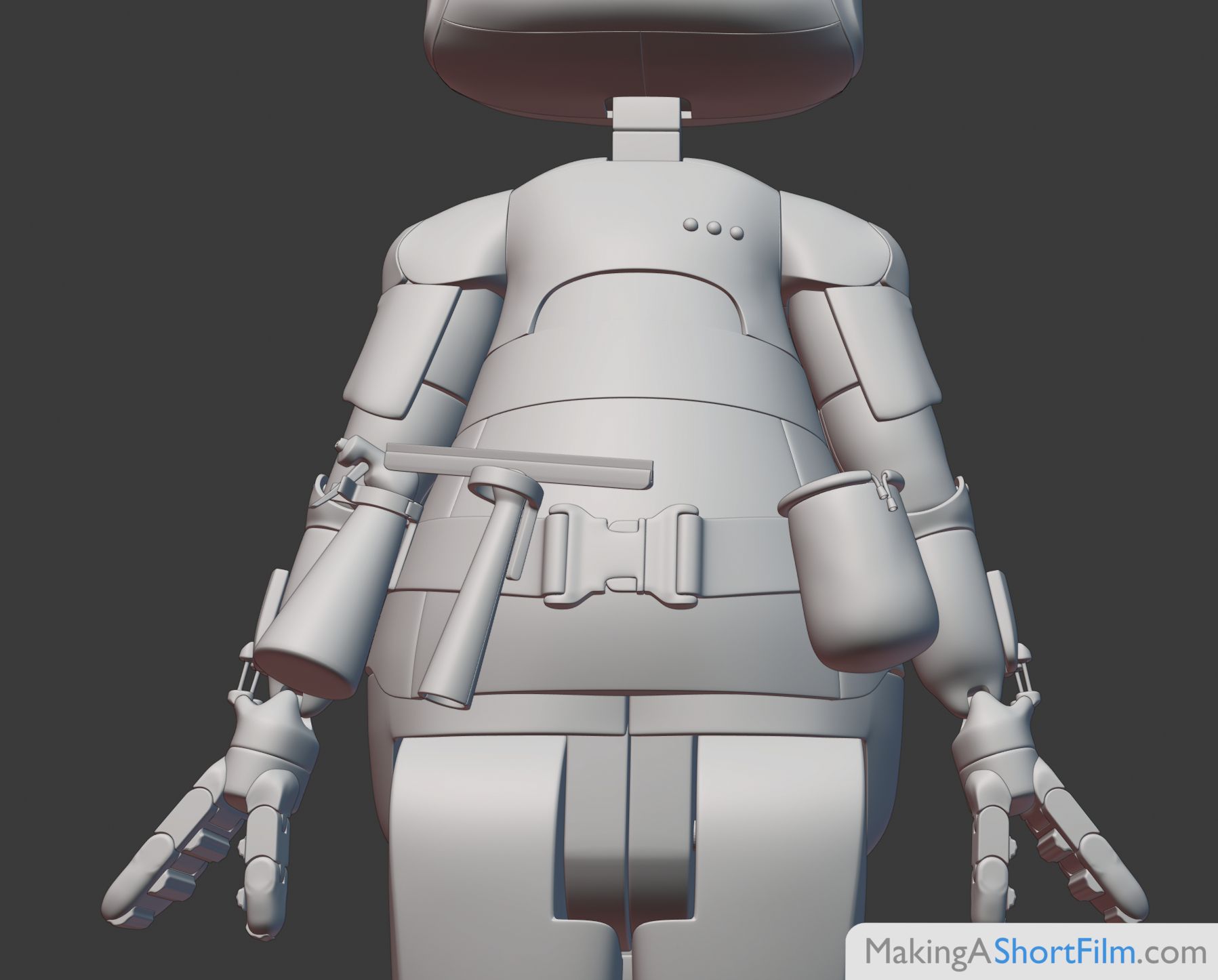 I have also adjusted the chest completely, skipping the planned piece in the center, that was supposed to move out of the way to make room for the rotation of the upper body. It felt too clunky and distracting. Instead the top of the torso simply rotates, with nothing getting in the way (except for the stop in the back, visibly limiting the range of motion).

I also added a bit of a plate in front och the space between the legs, so the utility belt doesn't get caught in the moving parts. 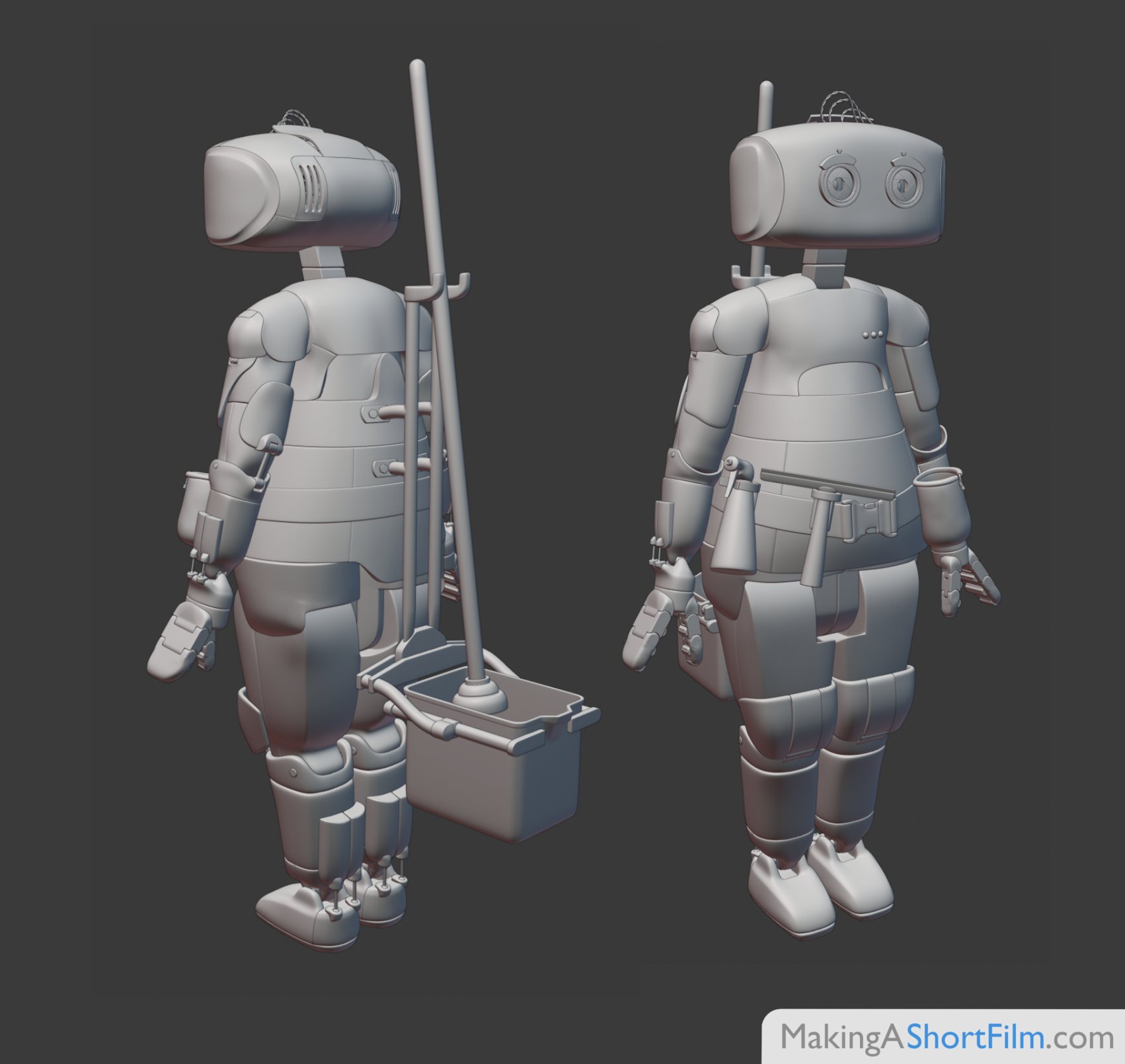 Another change is that I enabled the bucket to move in all directions. I felt like having it static on the back would make it too difficult to animate the Robot mopping without him spilling all water in the first step he takes. Now I will be able to animate its angle manually, making sure it is rocking back and forth in a strong enough manner that just enough water escapes with each step.

The next step is now to improve the rig I have started and make it completely ready to be animated. See you when it is done!