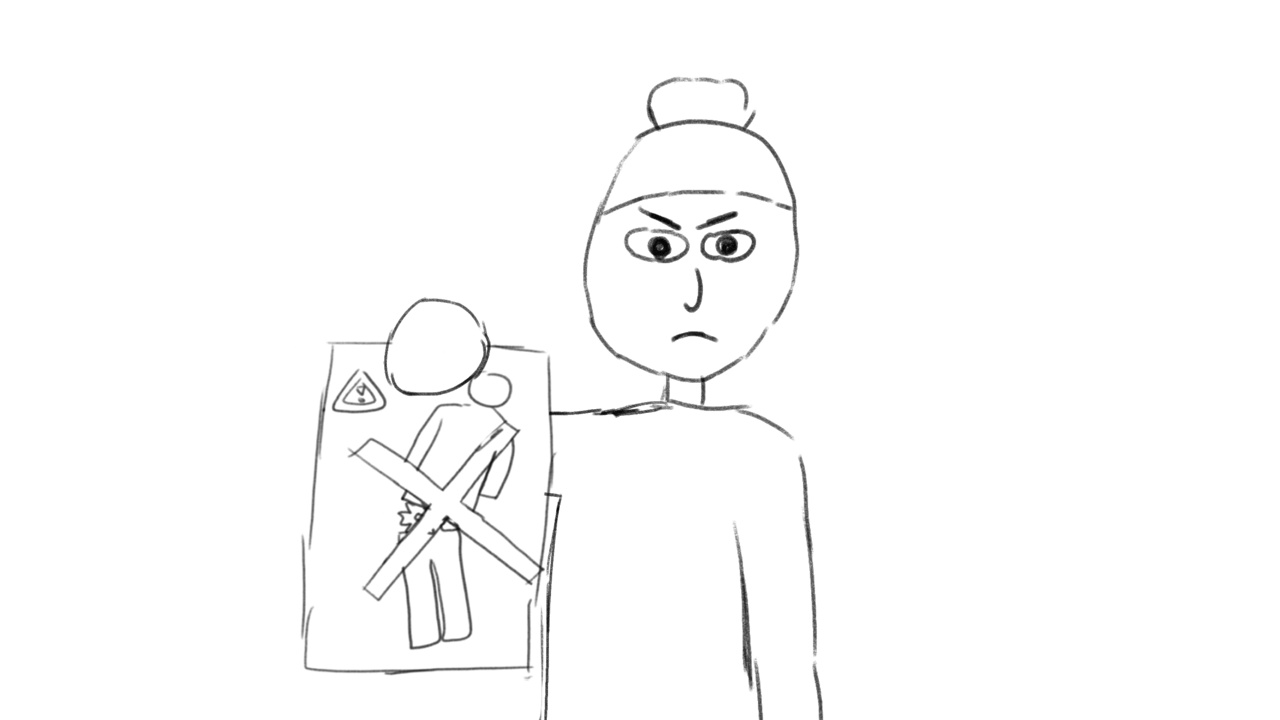 I have now planned the seventh scene of the film. This is where the Doctor interferes once again, this time almost ending in disaster for the Robot. Thankfully, the Old Man is able to save the day. Here is the result:

The script states the Robot is pushed out of view by the Doctor, and that he later turns around to see what is happening. While planning the shots, I felt like it became too repetitious as this exact sequence happened earlier in the film when the Doctor interfered. So instead, I came up with the idea of the Doctor pulling the Robot out of the view, and swinging it around. That way, the Robot is facing the action "automatically" with no need to make any more movements.

I first thought that the Doctor would clear her throat to try to get the Old Man's attention, but since she ended up being in the shot when the sound was supposed to happen, I wanted to switch it to something more visual. I feel like if we can see the person, we should clearly see the sound be made as well. So instead I came up with the idea of her knocking on the chart. This also has the benefit of not relying on the voices of the characters which I want to keep at a minimum (preferably remove entirely).

Another minor change from the script is that it mentions the Doctor handing out pills to the Old Man as the reason for wanting his attention. Since the Old Man never does what the Doctor asks for, I felt like actual medication would be too important for the Doctor to just walk away from, without checking that it gets taken. Instead, I switched to the Doctor simply noticing that he isn't eating. Not a "pressing matter" in the same way, so it feels more realistic that she can walk away for a while in her rage. Also, by freeing the hands of the Doctor she can hold the chart the entire time, having quick access to the “Out of Order”-sticker without putting anything away first, improving the pacing of the scene.

I should note that the reason I included the pills in the first place was to reinforce the idea that the Old Man is very sick, and I do miss the element of showing that he needs to be there for treatment, and not just that the Doctor tells him to stay there. To fix this, I am considering having the Doctor carry pills and water in the next scene instead, namely when she walks in the room to notice that they are gone. That way, we get to see that he is missing something very important by leaving.

For the Doctor to get the pancake in her face, I need to get her head right over the bed as the pancake is centered over the Old Man. First I tried to make her look up at the ceiling and “lean in” at the same time, but it never felt natural. Instead I made her look closely at the old man first as if she is investigating if something is wrong with him. Then when she looks up to see what he is looking at, her head will already be in perfect position for the pancake.


With this done, I will move on to the next scene, which happen to be the last one you will get to see for now (as the ending is secret until the premiere). See you when it is done!