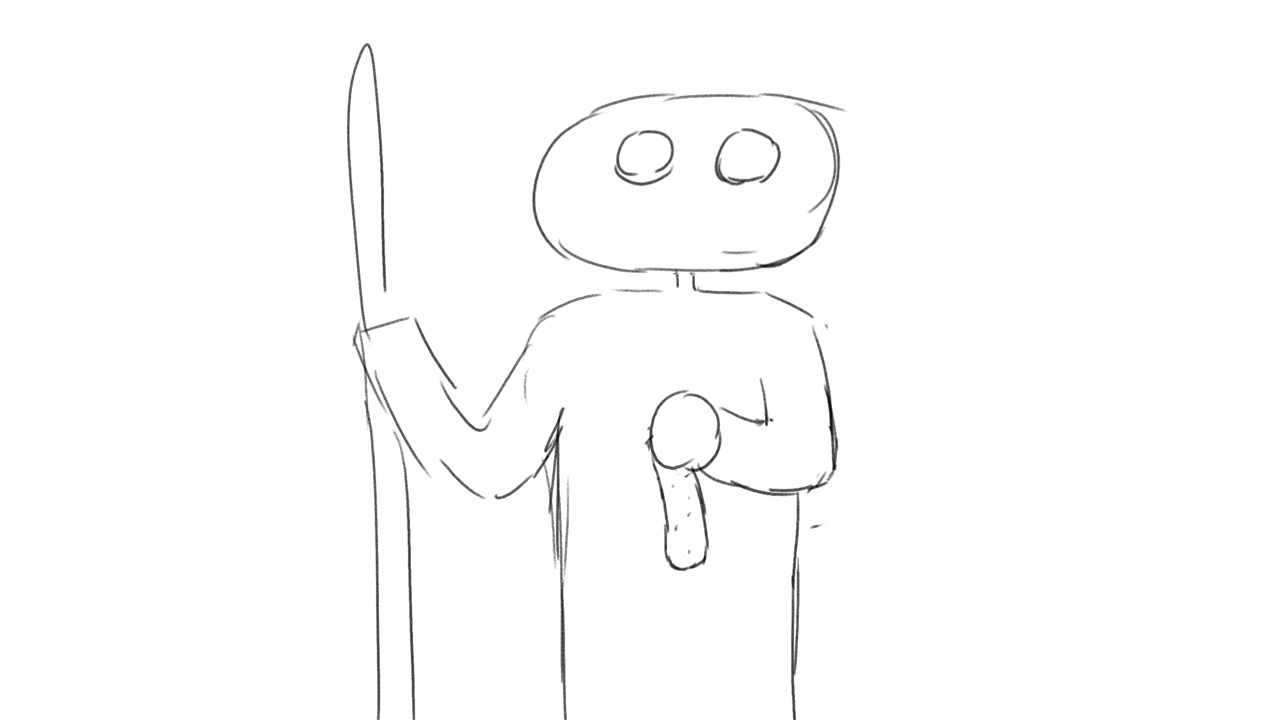 The sixth scene is now planned. This is where the Robot takes an initiative in helping the Old Man with the window, but gets stopped by the Old Man who doesn't want to take the fight. Instead the Robot comes up with an idea on how to recreate the outdoors in his room. Here is the result:

To make sure the fear of the Doctor is still present, I make the Robot walk towards the window sideways, always facing the door. Since the Robot's "sacrifice" is taking the risk, it must be clear that he is afraid of the consequences. This is also why he keeps his mop out instead of putting it on his back, in case he quickly has to start mopping again.

It's important that the Robot looks at the Old Man first to see that he is sad, before he makes his way over to the window. The Old Man should be the sole reason he goes to the window, not because he wants to see it himself. Then when he is next to the window, he should only be focused on the door, since he is afraid that the Doctor will come in. He doesn't look at the Old Man because he has no thought at all about the Old Man stopping him, which shocks him when it happens, and hopefully the audience as well.

I added a bit of grease (I imagine as a bit of melted butter on top) to the pancake, so the impact on the ceiling is more visible, with a splash. It felt too empty with just a simple round shape in the ceiling. Hopefully it will also resemble a sun more this way, like the grease are rays of sun.

The Robot and Old Man touches twice in this scene, first one of disapproval, and then once of gratitude. I like this because it feels like the Robot is learning the different meaning of a touch. The second touch is also the first time they are in the same frame looking at each other. Earlier in the movie, they have been either been in separate shots, or minding their own business if they share the frame. I wanted this to happen for the first time here to set up their friendship. This is the first step in their tight bond, which eventually becomes the Robot literally carrying him later.

Since almost the entire scene takes place by the bedside, the Robot and Old Man are very close to each other physically. This means that they will be visible in the same frame multiple times, but only with their backs and other "unimportant" parts. I chose to ignore this when making this animatic to make it simpler. Instead I just draw the focus of the shot, the key action and reactions. To figure out exactly where and in what way the other character will be visible in the shot will be saved for the 3D stage since it has no effect on the story. Instead it is easier to just let the computer tell me where the characters are in the scene, and adjust the camera so everything looks good.


With that done, I will move on to the animatic for scene 7. See you later!