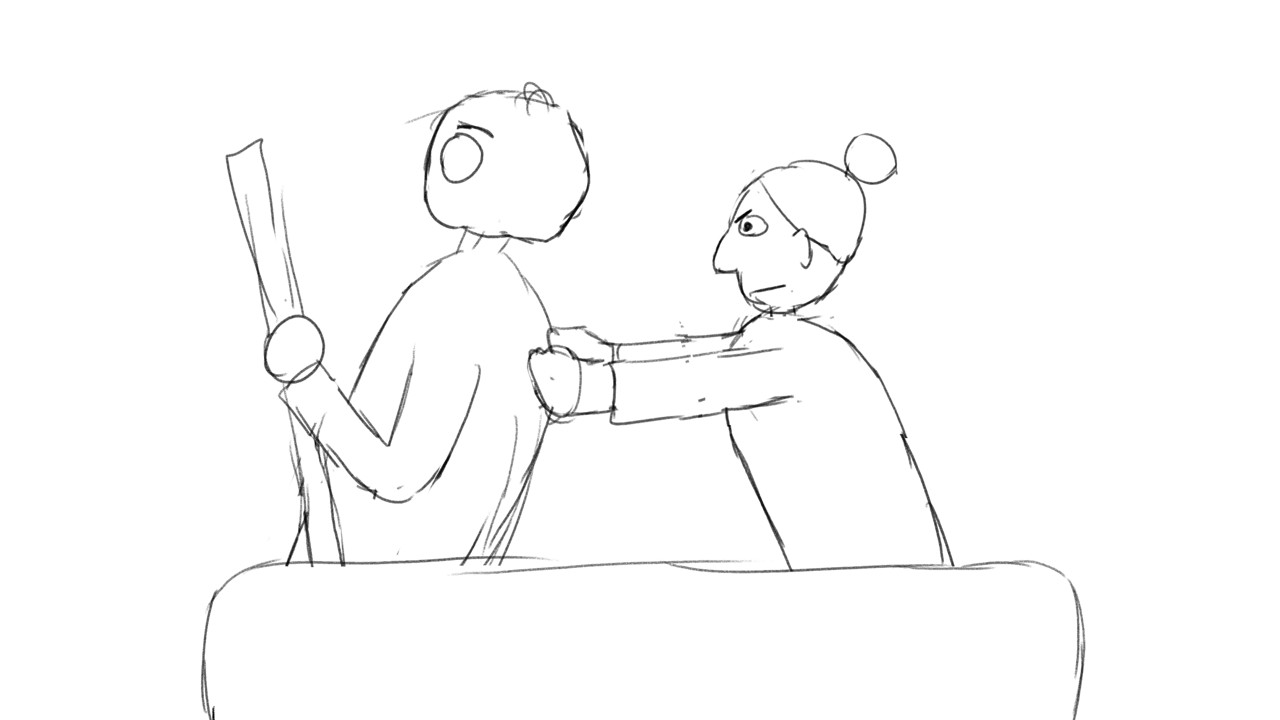 I have now planned the fifth scene of the film. This is when the Old Man asks the Robot for help since he can't do it on his own. They get see the outside for a short while before the Doctor busts them. Here is the result:

As I mentioned earlier, I am only including the sounds that are necessary for the story to work. That's why included the "PSST" sound in the beginning, since that is what makes the Robot look at the Old Man in the first place.

So far in the film, the outside has only been of focus and interest to the Old Man. In this scene, I want to start planting the idea that the Robot might appreciate it as well. This is why when the Robot pulls away curtain I start with focusing on the reaction of the Old Man, which we expect, and then move on to only show the reaction of the Robot. Hopefully this conveys the feeling that the Robot did not expect this to be behind the curtain and that it likes it/finds it fascinating.

The Doctor suddenly ends their moment and forces them back to their "proper" locations in the room. When the Old Man is pushed back into his bed, I want to mimic the opening, in that he lies there staring at the ceiling. That way we see that he has gotten nowhere. He is just where he, and this film, started. Even worse, he is now getting pushed closer towards that soul-crushing ceiling by having the bed raised. Hopefully this reinforces the feeling that the Doctor is actively pushing him to be where he doesn't want to be.

To really show the importance of a pretty surrounding to the Old Man, I want it to be clear that he doesn't care about anything else. He just glances at the food to see what has happened, but when it is nothing that can help him solve his problem of reaching the outside in some way, he just returns to looking at the pain in front of him.

Now, in the previous scene, the Robot notices that the Old Man is disappointed. In this scene, I try to take it further by really showing the Robot seeing the Old Man being sad, just staring in the ceiling, ignoring his food and everything else. It is important that the Robot feels the pain and the necessity to act, since in the next scene he will go against his fears and attempt to help the Old Man by his own initiative. It is necessary that this look and scene works, because otherwise it will feel completely out of the blue that an insecure and scared Robot would take such a big risk to help him.

There are four scenes left to do, so I will move on to the next one right away. See you when it is done!