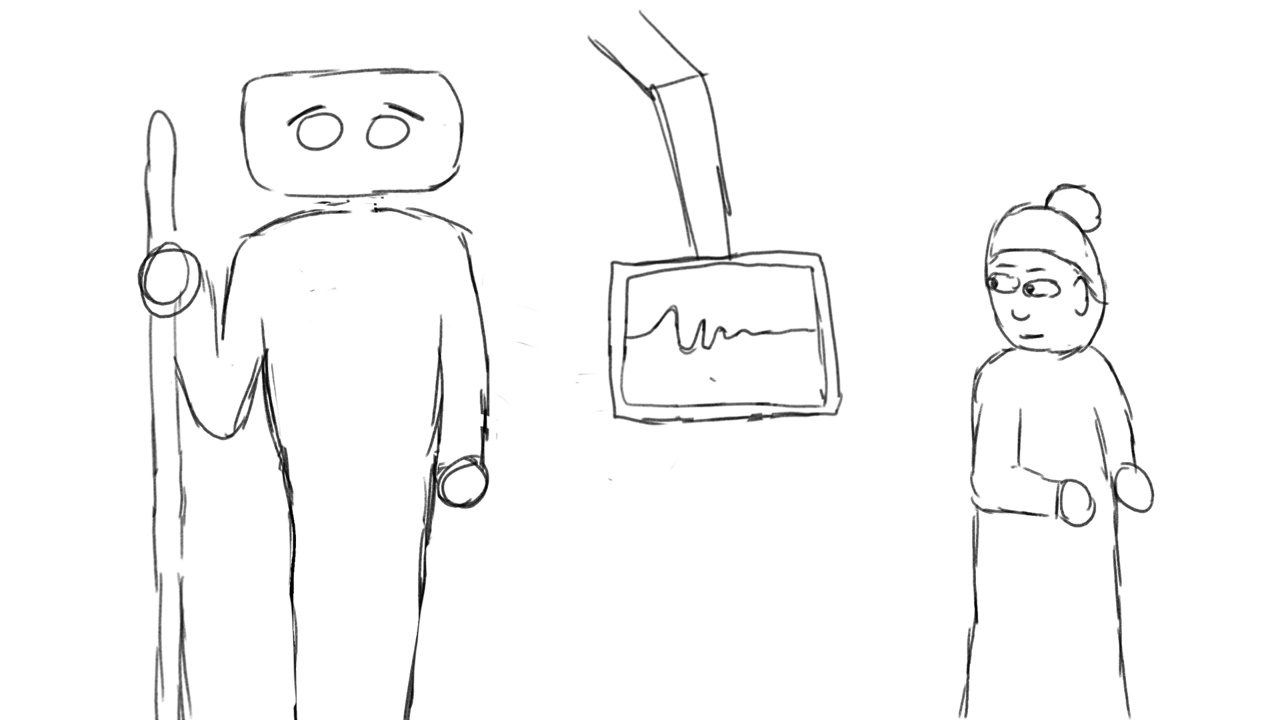 So the time has come to plan the fourth scene of the film. This is when the Doctor enters the room for the first time. We are presented with the fact the Doctor caring for the old man won't do anything to help him reach his goal of enjoying the outside. Instead, it is clear that it is up to the Robot and the Old Man to fix this by themselves, with the need of going against the Doctor which is in a strong power position. Here is the result:

The scene opens with the Robot showing off how afraid he is of the Doctor, displaying her authority and respect. It is not someone you want to get caught doing something bad in front of, which makes it funny that he is about to break an EKG-monitor. I think the Robot's reaction also works as a nice little foreshadowing to the fact the Doctor won't just do what the Old Man asks for. She is a character that does what she sees fit and it not afraid to strike down on others.

In the script, the Old Man is just sad that the doctor refuses to open up the curtain. However, when I made the animatic, it just felt too passive. So, I added a short shot of him begging. A good character should be active and try to solve his problems. The shot shows that he has done "it all", and that the Doctor truly won't budge. I think that small addition really sells the scene, as well as the struggle of the entire film. I also think it displays the character of the Old Man very well, in that he doesn't really care about his survival if it means that he is trapped inside.

I am unsure if I want to have a noise that makes the Robot turn to see the Doctor staring at him. It is kind of funny if he just "senses" it, but at the same time, a noise allows the audience to guess what is there before we see it, which also might make it more fun. As written in the script, I imagine a tapping foot noise in that case, but I have yet to decide, so I just kept it silent in this video.

I added a shot not present in the script right at the end. It is of the Old Man following the Doctor with his eyes when she is leaving. It felt important to know that he really sees the coast being clear before progressing. In the next scene, the Old Man starts interacting with the Robot, which he only would want to do when the Doctor is not around.

Now I will move on to the next scene. See you when it is done!