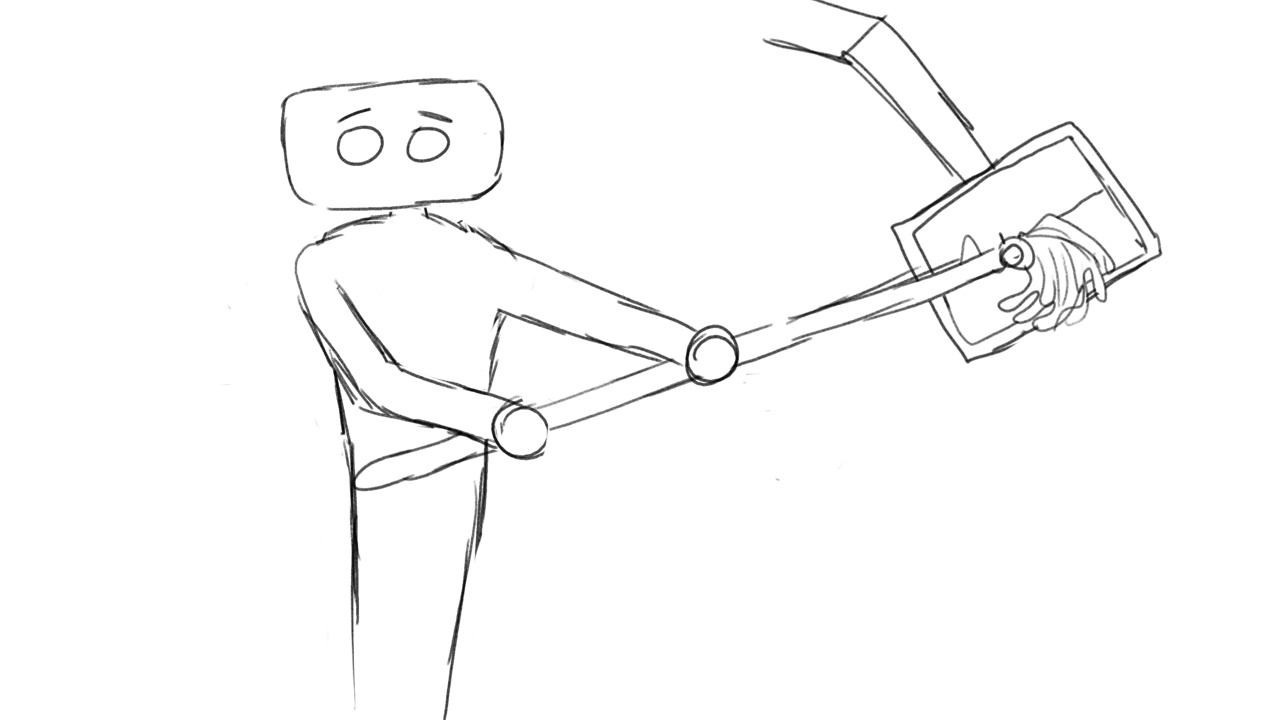 Here is the third scene of the film. Its point is to establish the pulling away of the curtain as a replacement for actually being outside, and the Old Man's inability to do so himself. I have done my best to slowly build up the intensity of the scene, until the curtain falls back where everything becomes relaxed again and the danger is over. I use faster camera zooms the further along we go, as well as more dramatic camera angles. Here is the finished result:

The stream of light through the curtains was always visible in the script, but as I mentioned in the previous update. I had to delay its entry a bit. This to allow for the Old Man to be passively longing for the window before springing into action, having a kind of paus before everything starts. So I came up with the idea that the stream of light shows up when the Robot sweeps along the curtains, unknowingly moving them a bit with his mop. I thought it fit the story nicely since it is the first time the Robot does something for him and they interact, only that it is completely unaware, from both parties. The Robot doesn't react that he moves it, and the Old Man doesn't care who moved it.

The Robot remains unaware of the dangers for the Old Man throughout the scene. When he stops to turn around and looking at the EKG-monitor, it is because of the stain. I actually first thought the robot would focus on the increasing pulse and then switch to the stain, being distracted. But I think it is more fun if he just always looks at the stain, completely focused on his job.

Just a short note about the sounds in these animatics. My intention is to only add the sounds that are needed for the story at this early stage. The knocking in Scene1 disturbs the Old Man so he wakes up, and the opening of the door in Scene 2 makes him look at it. That's why they are included. Previously, I intended for the loud beeping of the EKG monitor to draw the attention of the Robot, therefor be crucial to the story. However, as I stated in the paragraph above, I don't want the monitor itself to be what draws the Robot's attention, but the stain. So the sound is not crucial for the events happening, and is therefore left out.

I designed the Robot to have the cotton holder on the left side, as you can see in the concept art, but when doing this storyboard, I realized I wanted it to be on his right. I am making him right handed, so it should be the closest thing to him since it is the most integral object to the story on him.

I feel a little bit uncertain where the Old Man should click on the "help"-button, but I ended up giving him a wired remote because I thought the action felt the most clear that way, instead of just reaching to a stationary button somewhere. However, he is kind of pulling the remove out of nowhere as it is. Hopefully I can give the remote a natural location on/in the bed instead of it just magically appearing by his legs.

The next time I write, it won't actually be about the next scene. Instead, it will be a pretty big announcement about the website! See you then!