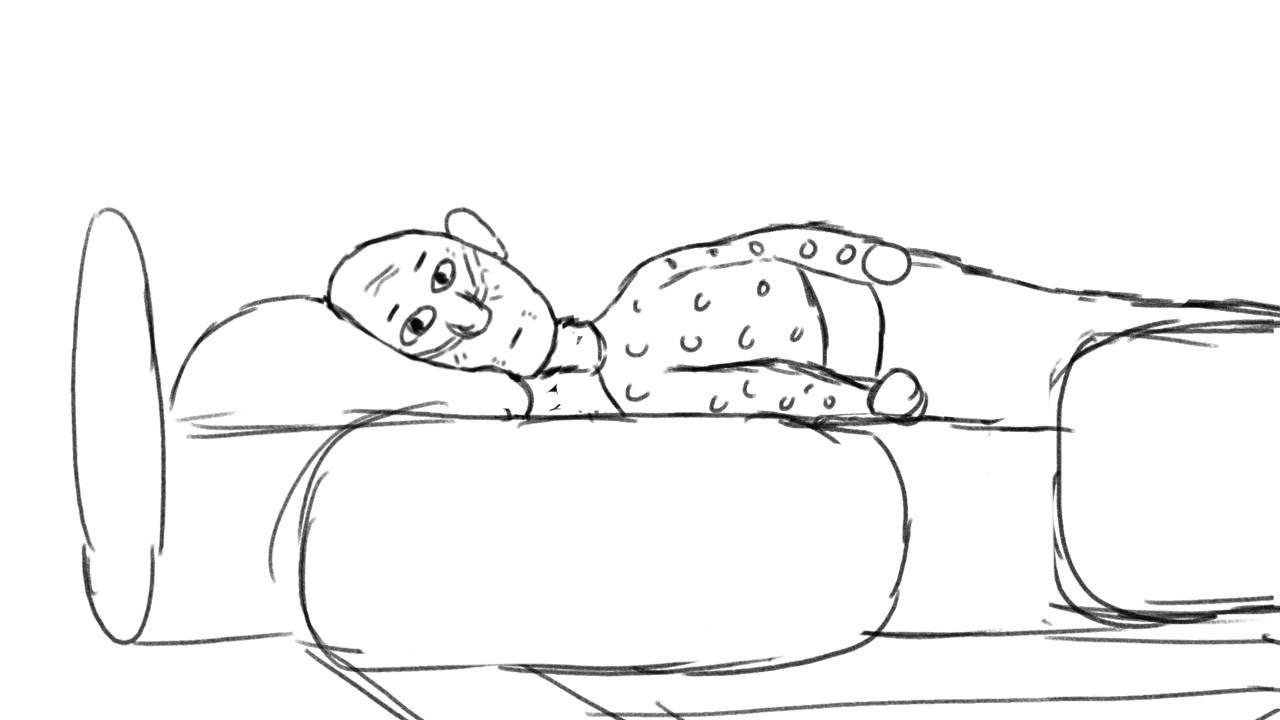 The point of this scene is to establish the life of our main characters. The old man lies in his bed, dreaming of the outside, and the Robot cleans his room. They have nothing to do with each other yet, they just exist in the same space, barely acknowledging each other. The scene is fairly slow with a lot of pauses, setting up how boring their existences are. Here is the resulting animatic:

In the script, the Old Man goes directly from looking at the Robot who disturbed him, to lying on the side towards the window. When I drew it, it felt too empty. I need to show that the Robot was a distraction, so the Old Man first returns to his previous state. Then he is reminded that this place is not what he wants, so he turns towards where he wants to be (the window). In order to bridge these two parts (from Robot to longing), I used the same trick as in scene 1. I made him sigh, except his time it is a sigh of displeasure and a feeling on not having reached it. The same action, but the opposite meaning of the one in the dream.

I am quite happy about the reveal of the title. It is against the window, which is the "gateway" to the outside. Also, it appears in a sweeping motion, much like the motion one does to pull away the curtains, revealing the outside. I also like that the Robot obstructs the view of the Old Man looking at the window for a couple of seconds when he mops in front of him. It doesn't have a big impact, but I think it looks fun, as well as show how they ignore each other at this point in the story.

The moving of this reaction shot also has a side effect in that the stream of light reaching the Old Man's face can't be present. I don't want him to focus on that just yet so I keep the curtains completely covered. Instead they will be opened in the next scene, which turned out to actually improve what has to happen in scene 3. It is great when fixing a problem in one place actually improves something else in a different place. It really gives the feeling that you did the right thing. I will show you what I mean after I have finished the animatic for scene 3.


See you next time!