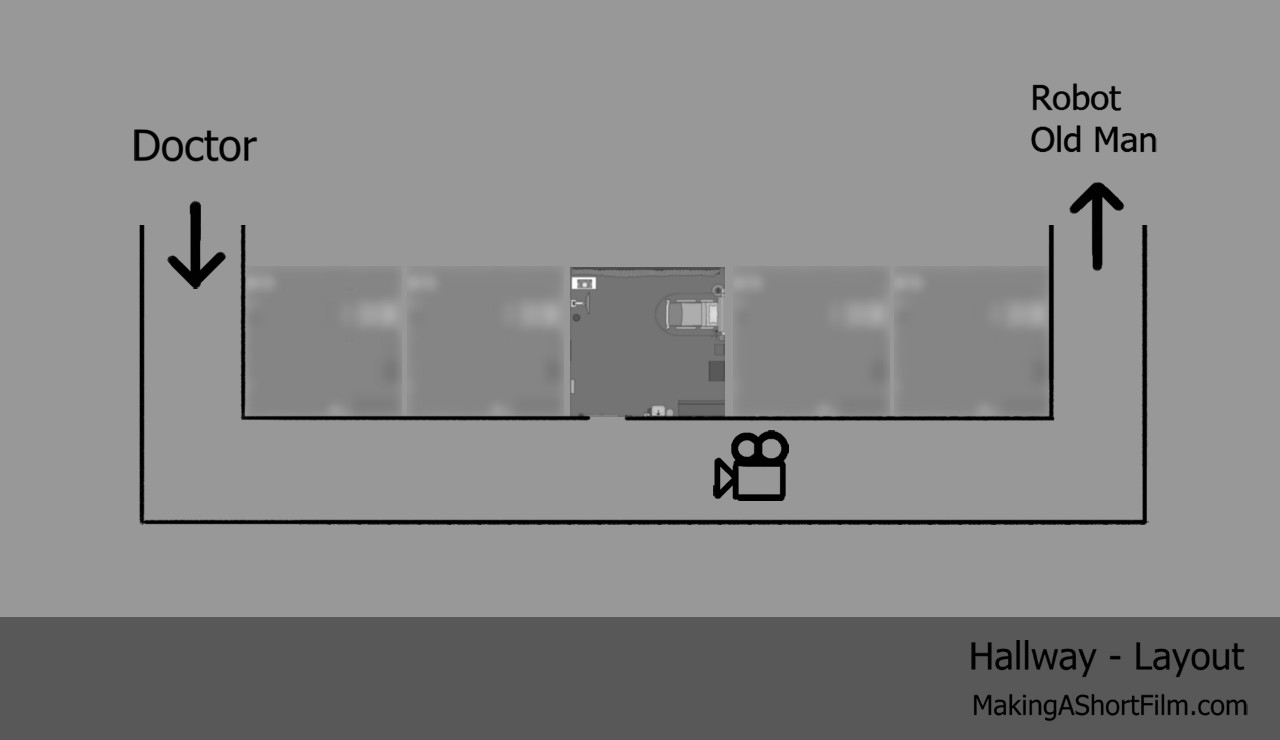 The hallway is only in the movie for one scene (a few seconds), and it could actually have essentially been cut to save the work of creating another room. However, I do really like the shot of them actually leaving the hospital room, and I think it is worth the extra work. It will do a lot for the feeling of the film as it is essential in getting a "break" from the Robot deciding to leave, to the Doctor entering and seeing that they are gone.

Shape-wise I want the Doctor to be able to enter into the frame from the side, and the Robot/Old Man to leave the frame to the opposite side. So, the entire hallway will be in the shape of a kind of U (see the image above). I want the hallway to be fairly long, so it looks like a very open space compared to the hospital room, hinting at freedom. I want the room to be placed in the middle of the hallway so they have to walk quite a bit before getting out of sight, increasing the danger. At the same time, I want the danger of "anything can come around the corner" to feel pretty close, so I think 5 rooms long will work well.

Since it is still part of the hospital I won't go into any great lengths to make it unique. Instead it will simply be based on the hospital room, with some minor changes/additions.

First of all, I compiled a list of items I want in the hallway, both for realism and for the story:

To make it clearer that they are now in a different room, I want the colors palette to differ, even though the general design stays the same. They come from a sickish green room and I want the hallway they enter to give a different feeling. A feeling of danger. Nothing extreme, but a bit more saturated colors and red/yellow. This to really show that they should not be there.

Since this room is very simple, I decided to draw a single point of view shot down the hallway, pretty similar to how the camera will shoot it in the finished film. The camera placement is shown in the layout image. Since this image won't be used directly as a reference when modelling in 3D, I didn't bother with trying to give everything their proper measurement. Here is the resulting image:

I put a red floor line on the side of the hallway where the Doctor will come. In the opposite direction, in which the Robot and Old Man goes, there are green, blue and yellow lines, hinting at them going towards the nature and freedom.

I think the result looks fairly good. It should give a subtle but looming sense of danger upon entering. It still needs a bit more detail stuff though, which I will add when modelling. Especially the ceiling will be improved by adding piping and using more of the parts from the hospital room ceiling, but as a base for the look I am going for I think it works well.

With that done, I will move on to the final location concept art; the city. See you next time!