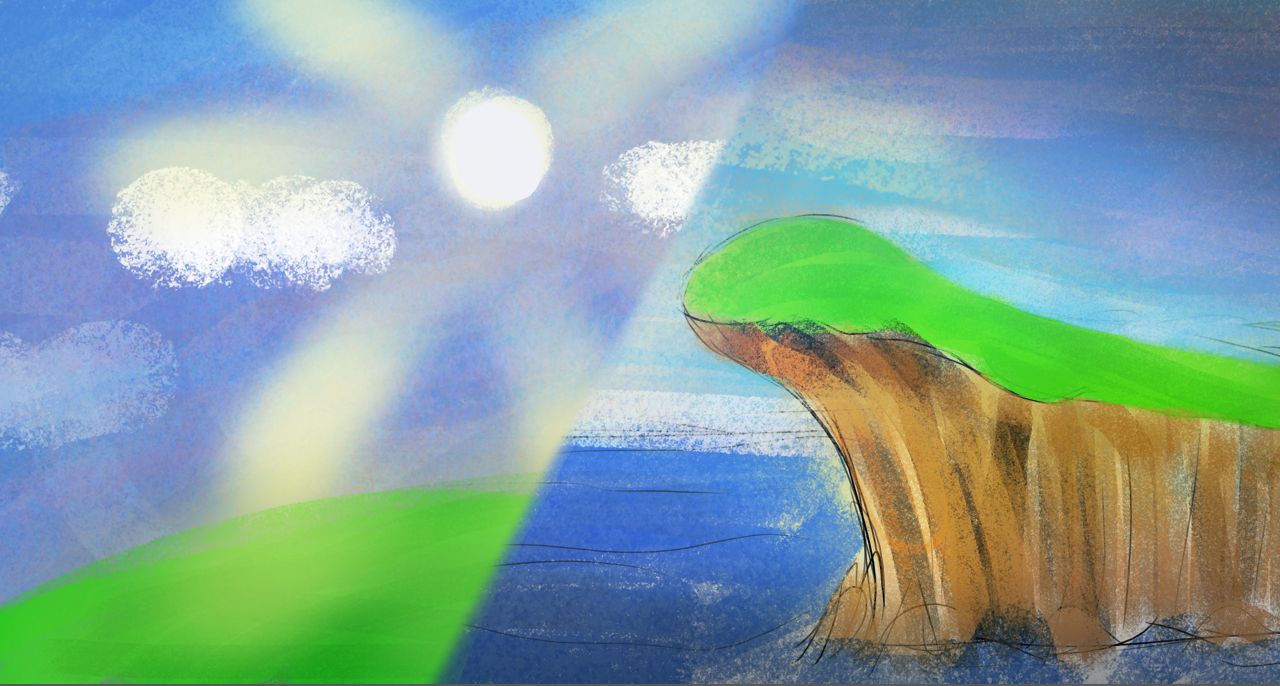 The movie opens with the Old Man being on top of a hill, enjoying the breeze, sun and sky in front of him. This place of course has to be designed, so that's what I have focused on this week.

My previous concept art for the film has been very much like blueprints for the 3D modelling stage later. They are very straight from a certain angle, reveling shape and base colors. However, for this I instead wanted to focus on finding the feel of the scene. Therefor I created these more like a traditional paintings, basically painting frames from the film instead of pure reference materials. Because of this, these images won't be used directly when I model the scene later, but instead act as inspiration for where I want it to go.

I decided to paint the dream landscape in two separate views. First we have the entire cliff from the side (which will basically be the opening shot of the short film).

I want the dream to feel like freedom, so I decided to surround the hill mentioned in the script with sea. This effectively turns it into a cliff instead since I want him raised in the air and not on a beach. That way, it feels like there are no boundaries around him. It just goes on to infinity. I also envisioned the shape of the cliff like a stair towards the sky, rising up from the ocean, reaching its highest point at the edge.

When I had painted the basic ocean, cliff and sky, I added multiple layers to improve on the mood. This included light rays, giving the cliff a kind of glow, as well as a vignette effect to really draw the attention to the light that passes from the top left corner onto the top of the cliff. I also added a hint of pink into the sky just to make it a touch more dreamlike. I kept all the colors pretty saturated to get a good contrast when we switch to the hospital room in the following scene.

The second view is the sky as the old man sees it when he stands on top of the hill/cliff.

I am not super happy about this one since I think I have failed to make the sky look interesting. I looks completely generic. However, I do want the sky to "just be pretty" and not something extreme. The Old Man should want to be out in the sun, and not in some special magical world, so this might be good for the story after all. I will continue to tinker with the shape of the clouds and the position of the sun in the finished scene though, since this is probably a bit too boring.

With the dreamscape done, I will move on to painting the next location; the hallway. See you then!