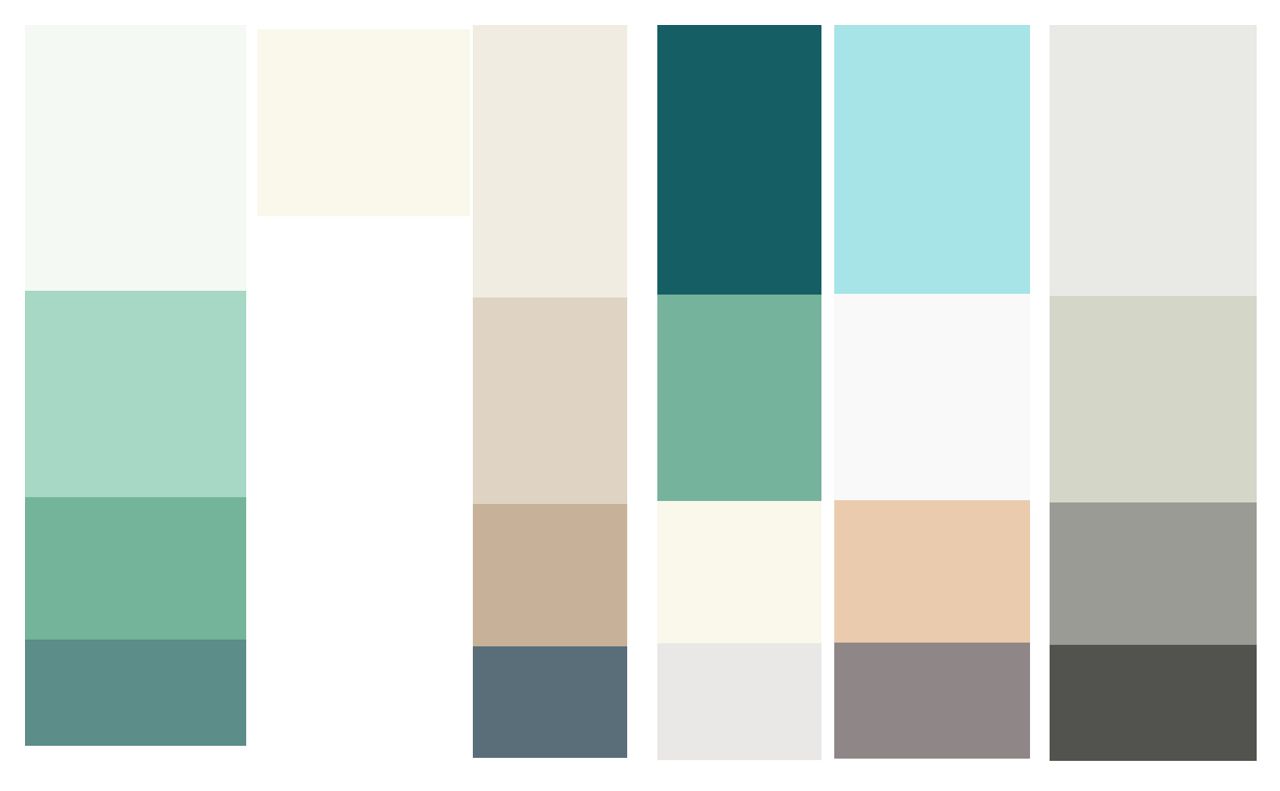 The only thing left in the hospital room concept art was to give it color. This might sound simple, but in some ways, this also basically decides the film's color palette at the same time, since almost the entire film takes place in this room. However, I tried to not get scared. I can always adjust this further later down the process if this didn't end up well.

I knew that I wanted a blue-green room, with a lot of focus on the teal/cyan. I also wanted the blues and greens to feel more like something "sick" rather than the blue and green found in nature. That way, the colors are close to what the Old Man wants, but yet so far. I also wanted the whites to be somewhat towards yellow to make them a bleak impression of the sun and clouds.

I think finding pleasing colors is extremely difficult, even when I know what direction I want to go. So, instead of trying to come up with nice colors directly on my own, I decided to reference a few color palettes online. I scrolled through a bunch of them on ColorHunt, looking for ones that fit what I was having in mind. I found 6 of them which I liked (1, 2, 3, 4, 5, 6). I combined them all into one image for easy referencing, presented at the top of this post.

All the resulting colors in the finished concept art not there, but instead this was a great starting point for me to have something to work with in the beginning. By placing these pre-made colors in different parts of the room, I could see what I liked and what I wanted to be different. Based on that, I manipulated the colors further and added some of my own. It clearly removed a lot of the intimidation of the "blank canvas".

So, let's take a look at the result, one view at a time: 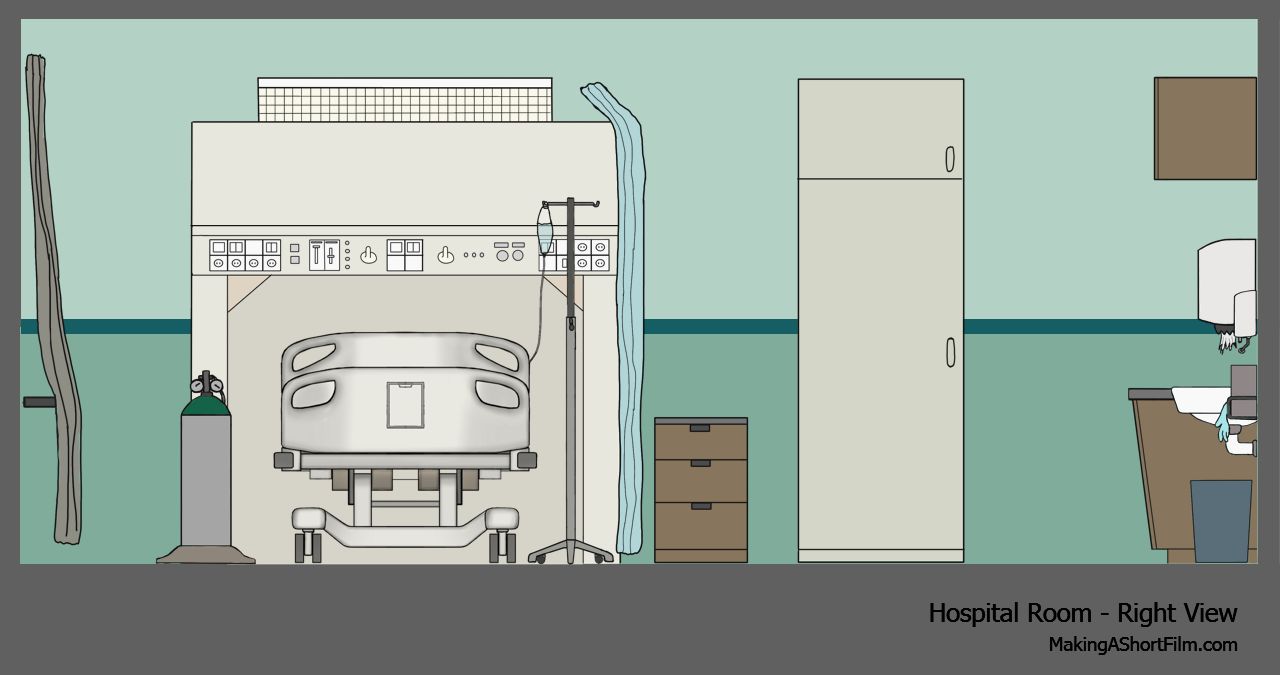 Right away, I felt like the wall became too empty with just a single solid color, despite having added a fair amount of items to the wall. So, I decided to split it up in the middle, giving it three distinct colors. I think it gave the room much more life, but not too much. Just the right amount of depressing. 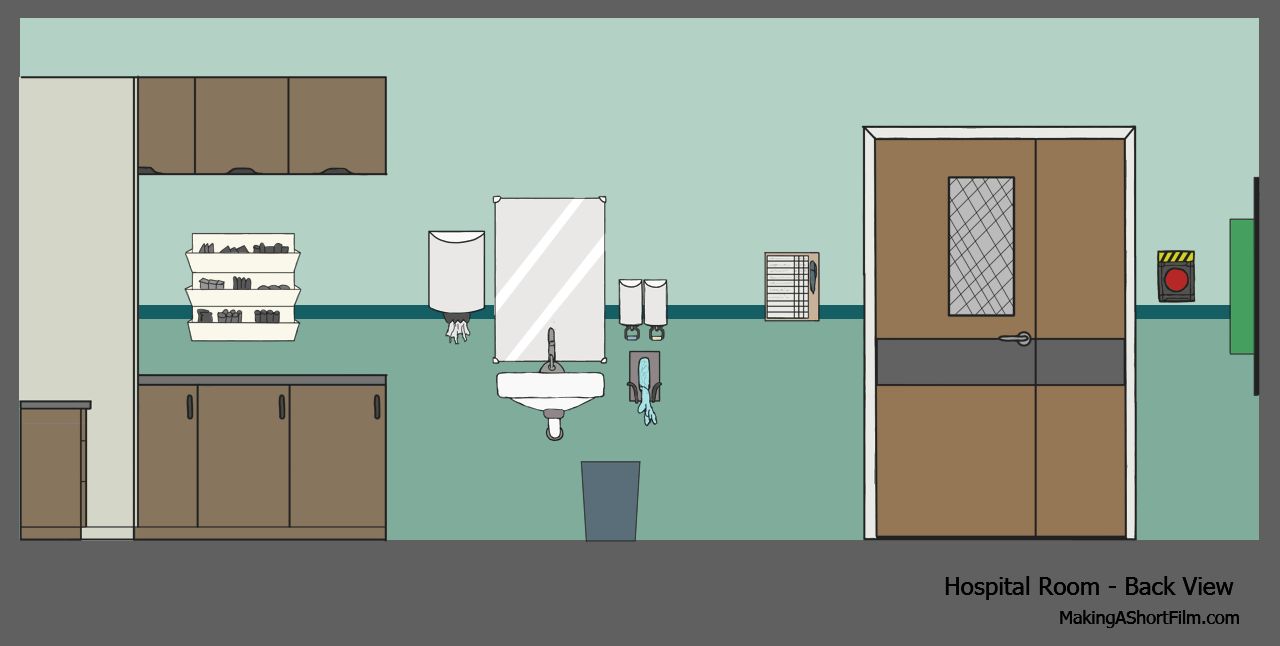 I gave the alarm button a strong yellow warning tape, as well as made the button itself red. I really want it to look alarming (hah!) when it is slammed by the Doctor.

If you look closely, you might see that I left all the items in the wall container gray. I feel like I can assign those colors and materials in a randomized/automatic fashion in the 3D scene later, instead of doing it now, without much negative impact. 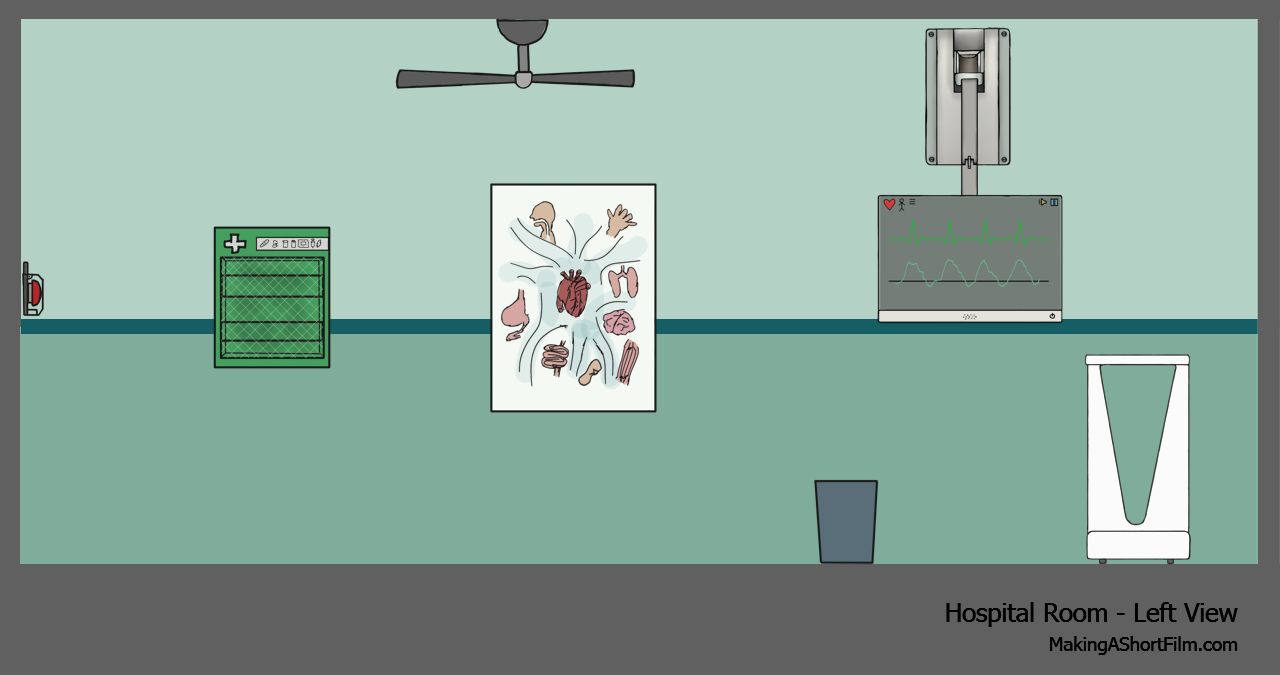 I gave the poster fleshy, red/pink tones to mimic the flesh of the body. Just like the rest of the room, I made all the colors fairly low key. I want everything to be pretty desaturated, so there is a big contrast between the Old Man's colorful dream in the beginning and what he later wakes up to. 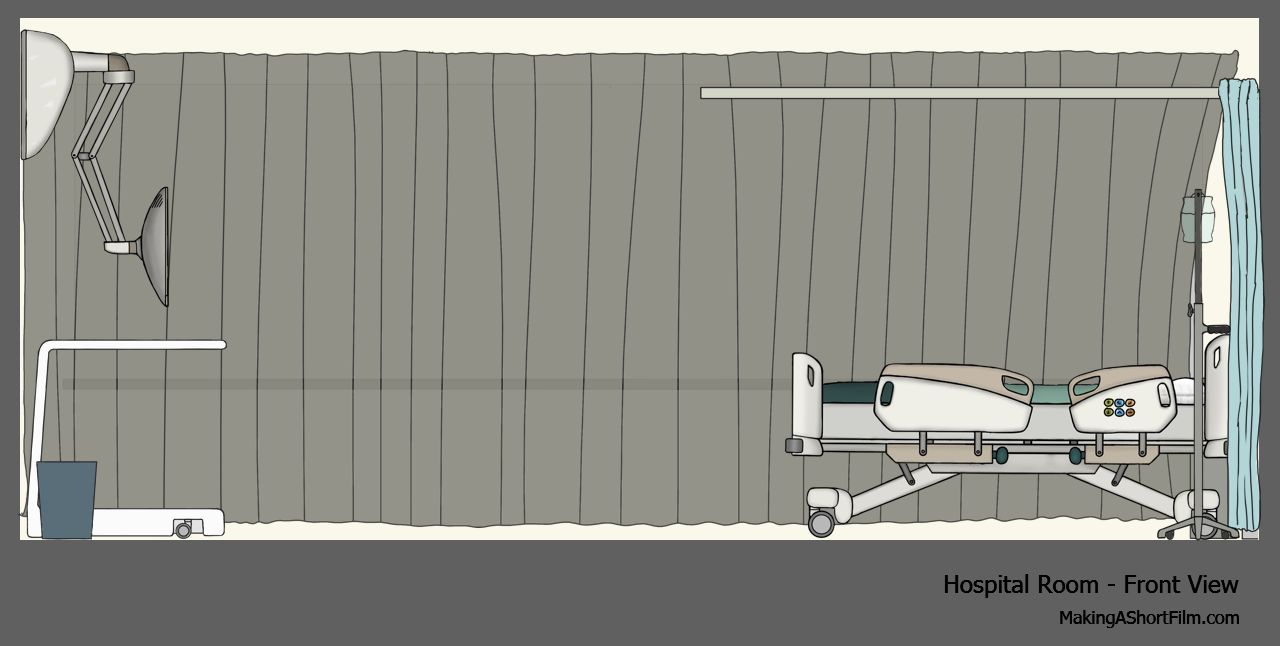 Instead of giving all four walls the same split blue wall, I decided to give this a single solid color. That way it doesn't draw attention away from the windows in the center. Now it instead becomes a big frame around them. As for the color, I decided to make the wall completely white to reinforce that the light comes from that direction. This wall and windows are like a portal into the world the Old Man wishes he was a part of. 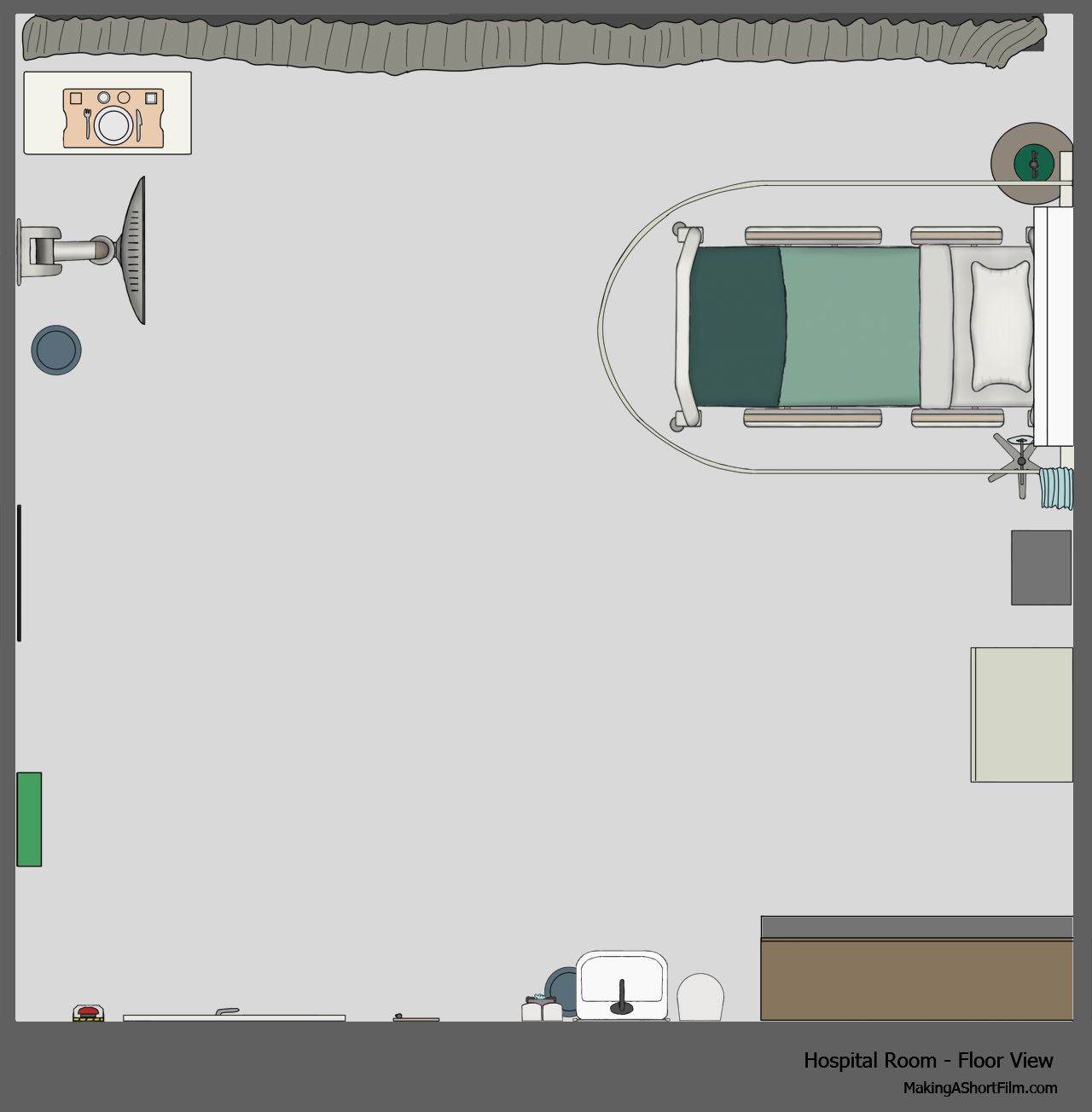 The floor is not detailed in this concept art, I just gave it a neutral gray for now. Later in 3D, I will give it some more texture. I've been thinking thought about making it tiled, but I will probably just keep it uniform with a subtle speckled pattern.

I gave the tray on top of the table a pretty unappetizing color in my mind, to make the food look even less tempting when it is served. Perhaps it is too eye-catching in the film, in which case it will be dialed down. 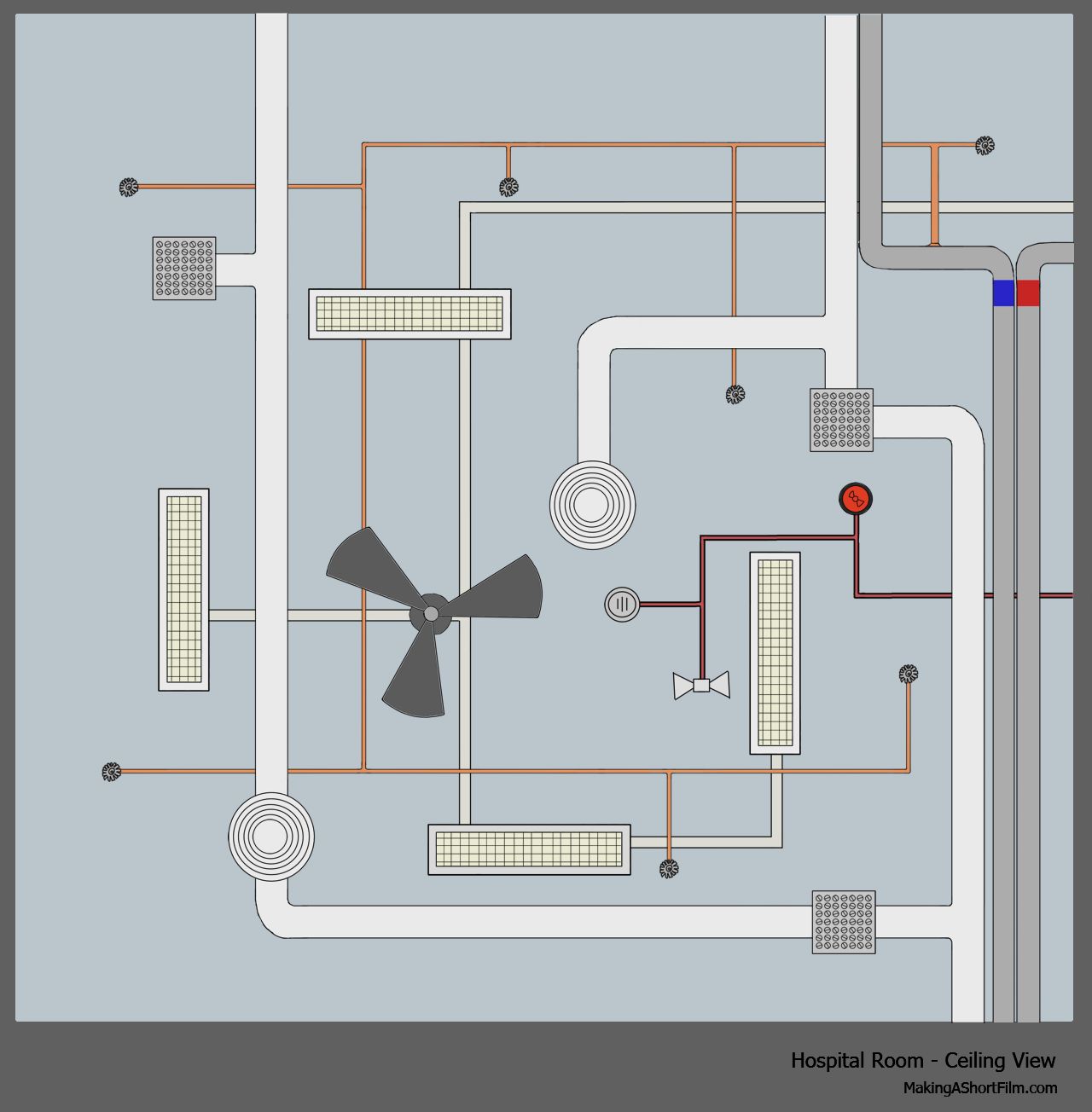 I wanted the ceiling to have blue color to make it look like a sky when the pancake and cotton is placed on it. However, as stated earlier, I wanted the colors to be very muted for a strong contrast with the colorful outdoors, so I picked this as a compromise. Not a vibrant color, but still blue enough to sell it as a sky with the right items in front of it.

This concludes the concept art for the hospital room. Now I will move on to designing the next location in the film. More accurately, the first location of the film; the dream landscape. See you next time!