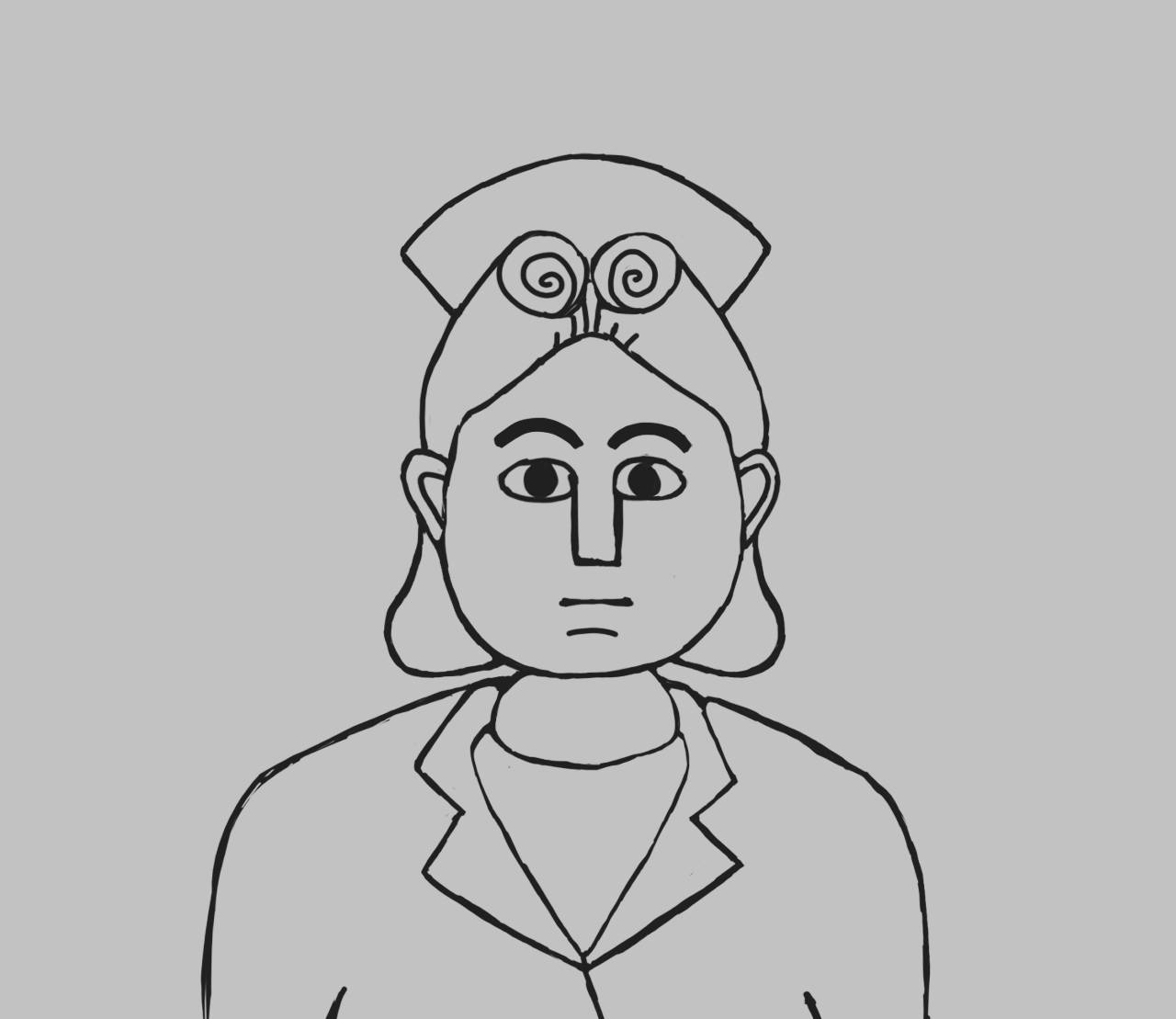 So, the time has come to design the antagonist of the film, the Doctor. First of all, I wanted the doctor to be a woman, to give film a bit more equality. Now the film will feature a man, a woman, and a robot (which is neither).

The image up top is the look I created first. I really liked it and the shape of everything. However, the hat makes her look like a nurse. And I don't want her to be a nurse! One could absolutely argue that it would be more realistic with some kind of nurse, considering the work tasks shown in the film. Like handing out pills and lunch, it shouldn't be the "highest ranking" personnel doing it.

However, I really want the power struggle between the characters to mean something. It simply has to be a doctor. She has to be the one making the decisions, sitting on the power, being the one stopping the Old Man and the Robot. She can't look like someone just listening to someone else's orders, or everything will fall apart as the Robot and the Old Man would not seem to battle the real enemy, only a henchman.

So I cut the hat, and without the hat, the hairstyle didn't really work. I tried a bunch of other hair styles instead, and I decided to go with the hair tied up in some kind of knot (the knot is behind her head in the image). This is because I want her to look very serious and strict. Also, as a little bonus, the CGI will become easier as well since I don't have to deal with hair simulations if it is all tied up. One less thing to think about.

So, here below is the finished result. I gave her a white robe, which is typical for a doctor. I keep the robe buttoned up though in order to make her look strict and uninviting like I want to. She takes her job seriously, she is very professional, but she has gotten a bit cold over the years. She does what needs to be done, without thinking much about the fact that those who she is treating is actual people.

As for the belt on the waist, it is not very for typical for doctors at all, but I wanted something to break up the robe. This to make her look less like the Old Man, which has one long gown. 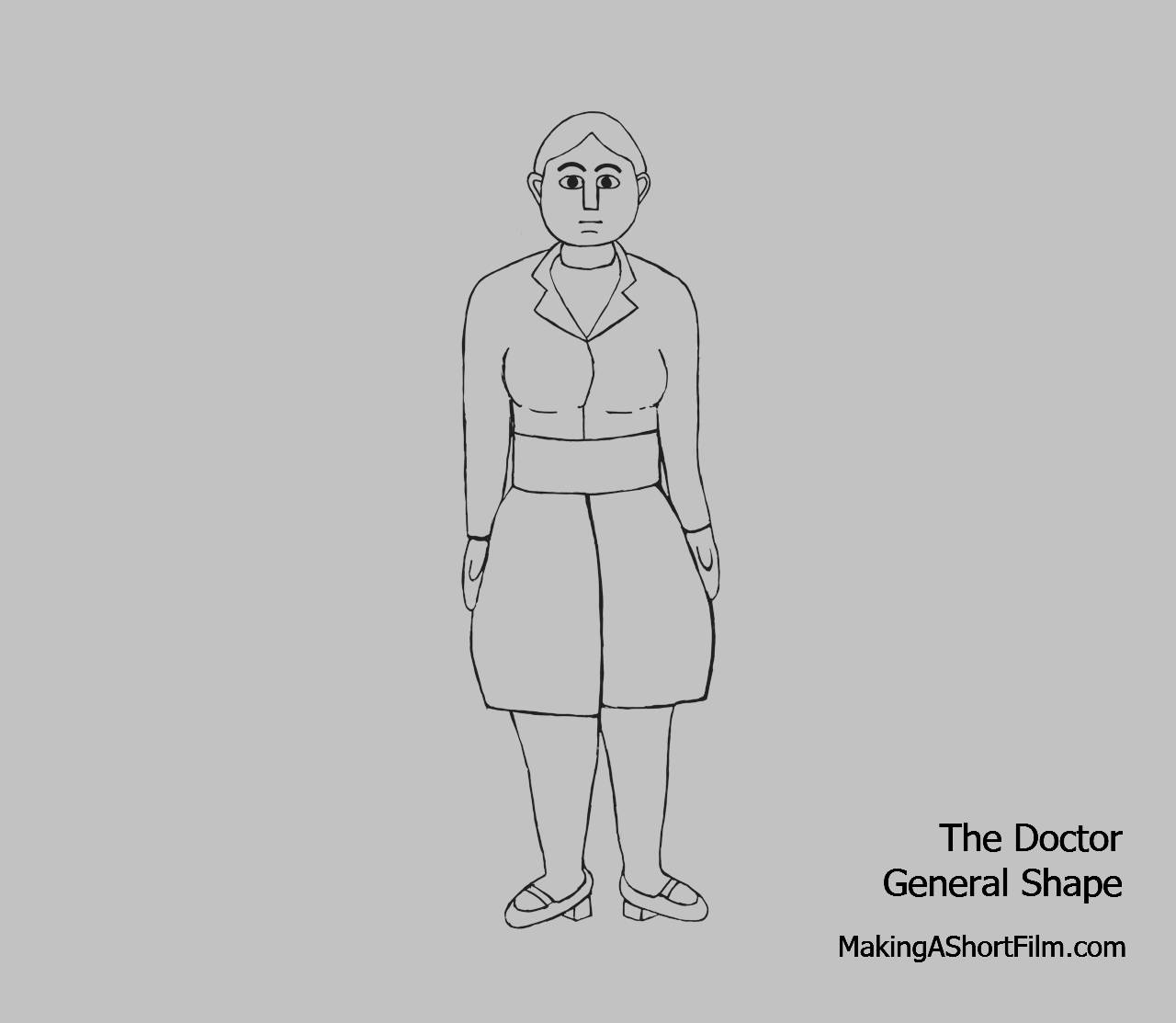 The Doctor har very little character in the face right now. A small part of me thinks it makes her forgettable, but the other part of me likes her bland. I want her to have grown cold over the years, and I think a bland, neutral face looks like someone who's personality has washed away over the years.

Also, I don't think she has to look mean or evil naturally, just because she is the villain. Not at all. Her scary-ness will come from her actions and facial expressions. In the beginning I want her to look kind of neutral, but as the film progress, she will grow irritated, and finally get really angry, unleashing somewhat of a monster.

I think this will give a good effect when the Doctor first enters the room as well. She will look somewhat nice, or at least not like she will be a problem. So, when she pulls the curtains shut instead of opening them, it will be a bit of a shock moment (hopefully).


So, that's it for the reasoning of why she looks like she does. Lastly, here is an image of the main geometric shapes the character is made up of. By working with these shapes, I hope I have been able to give her a unique and clear look, even though there is nothing that really sticks out about her. 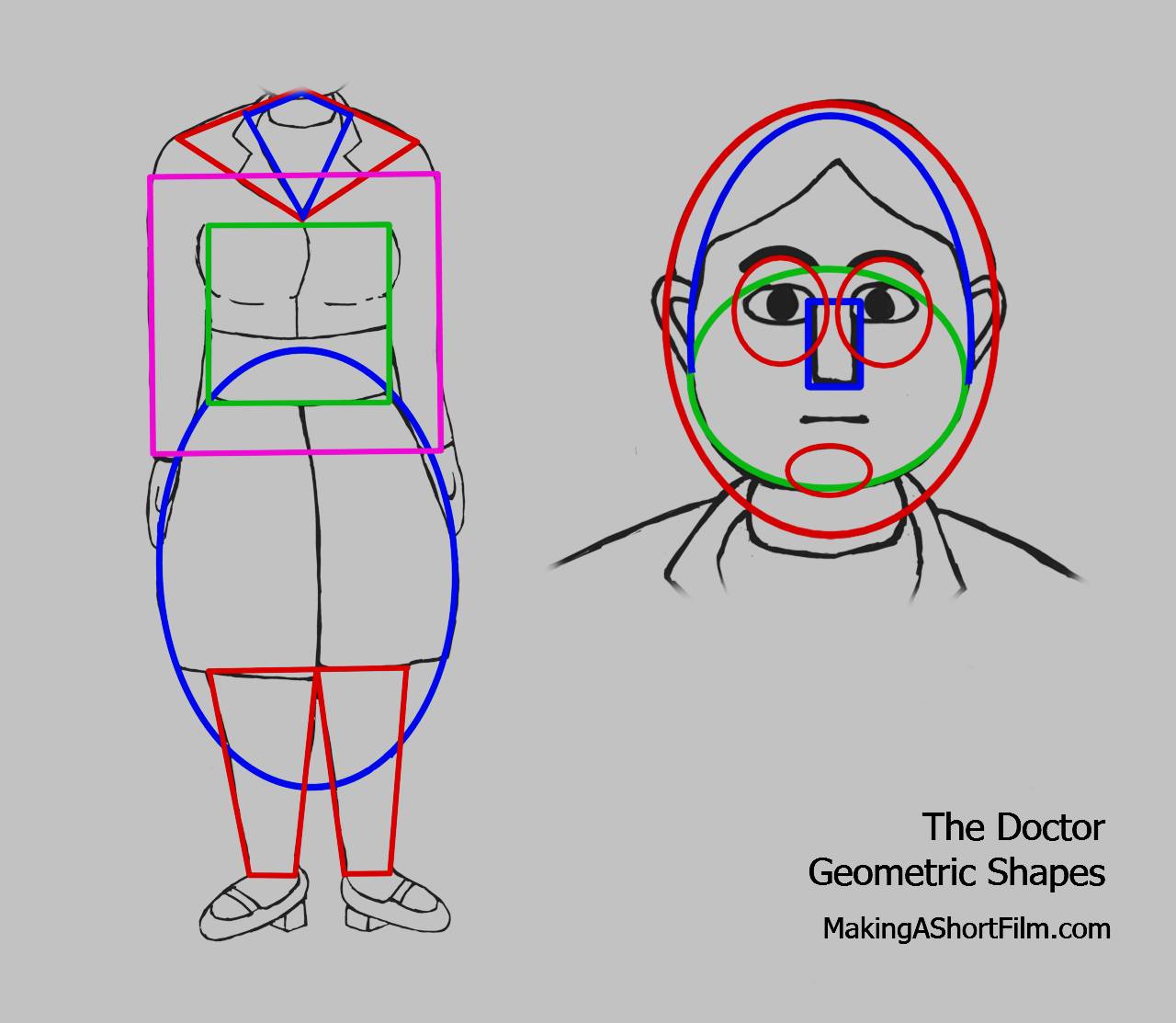 Now I will move on and make the image much more detailed, with a side view as well (reveling the haircut a bit more).